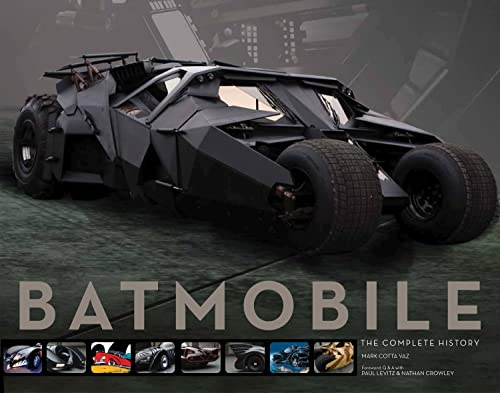 Explore the complete history of the Batmobile with this deluxe coffee table book. Here for the first time is the complete history of the sleek, sophisticated, incomparable Batmobile. From its humble beginnings in the pages of Detective Comics, to its reimaginings every decade in the pages of DC Comics, to its unforgettable appearances on the big screen, this book explores each incarnation of the Batmobile in incredible detail and scope. In addition to comic books, the Batmobile has been immortalized in nearly every imaginable medium, including film, television, toys, and video games. Most recently, it was given breathtaking new life--and incredible capabilities--in Christopher Nolan's extraordinary film trilogy, which concludes with 2012's The Dark Knight Rises. While each of the Batmobile's incarnations will be explored, special attention will be paid to the "Tumbler" Batmobile from Batman Begins, The Dark Knight, and The Dark Knight Rises. With stunning gatefolds and detailed specs, blueprints, and historical comparisons, BATMOBILE: The Complete History is an informational and visual delight for auto and Batman fans alike. It's an unparalleled and high-speed journey that will leave you breathless. BATMAN and all related characters and elements are trademarks of and (c) DC Comics. (s12)

Mark Cotta Vaz is a New York Times best-selling author with more than 25 published books, including the critically acclaimed Living Dangerously: The Adventures of Merian C. Cooper, Creator of King Kong, a TLA finalist selection. His "making of" books include Godzilla: The Art of Destruction and Interstellar: Beyond Time and Space.