Artículos relacionados a The Arctic Marauder (Adventures of Jerome Plumier) 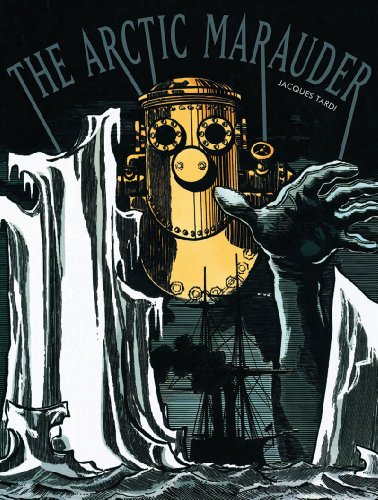 SPECTACULAR FAUX-WOODCUT VISTAS MAKE TARDI'S GROUNDBREAKING 'ICEPUNK' STORY A RETRO CLASSIC In its ongoing quest to showcase the wide range of Jacques Tardi's bibliography, Fantagraphics reaches all the way back to one of his earliest, and most distinctive graphic novels: A satirical, Jules Vernes-esque 'retro-sci-fi' yarn executed on scratchboard in a stunningly detailed faux-woodcut style perfectly chosen to render the Edwardian-era mechanical marvels on display. In 1899, 'L'Anjou,' a ship navigating the Arctic Ocean from Murmansk, Russia, to Le Havre, France comes across a stunning sight: A ghostly, abandoned vessel perched high atop an iceberg. But exploring this strange apparition is the last thing the sailors will ever do, as their own ship is soon dispatched to Davy Jones' locker via a mysterious explosion. Enter Jérôme Plumier, whose search for his missing uncle, the inventor Louis-Ferdinand Chapoutier, brings him into contact with the sinister, frigid forces behind this - and soon he too is headed towards the North Pole, where he will content with mad scientists, monsters of the deep, and futuristic submarines and flying machines. Told with brio in hilarious slabs of vintage purple prose, The Arctic Marauder works both as ripping good adventure story and parody of same, and, predating as it does the later and not dissimilar Adčle Blanc-Sec series, is a keystone in Tardi's oeuvre in his fantastical mode.

Starred Review. This... phenomenal one-shot [is] a baroque masterpiece... Precisely calibrated, perfectly laid out, and incredibly graphic, this is as good as adventure comics get.

Rendered in clear-line detail and taking place in the North Pole, the bleak graphic novel follows the frosty exploits of a young man in search of his missing inventor uncle. The ice-punk trend starts here.

The art is wonderful. Tardi has this rounded style that is unique and easily identifiable, all at once his signature. The level of detail is astounding, in the background and mechanical details as rendered faux woodcuts...: be sure to drink in every inch of this black and white work.--Scott VanderPloeg

Tardi's story is one thing, but his beautiful renderings give it a depth that brings it far beyond satire. The attention given to the Victoriana -- in technology, fashion and graphic layout -- functions as a love letter to that bygone world, which keeps the book from ever seeming cartoonish. . .--John Seven

Turns out it wasn't that easy navigating the Arctic Ocean from Russian to France at the turn of the 20th century. If you dig on Poe and Verne and antique diving helmets, this woodcut melodrama is just for you.---Paul Montgomery

It's recommended for those who like submarines disguised as icebergs, world-domination plots, detailed schematics of bizarre inventions, heroic dowagers, and sudden reversals, as well as for those who'd like to see all of the above rendered in Tardi's typically detailed linework, which looks amazing even when obscured by ice and snow.--Noel Murray

Really loving Fantagraphics for putting out the Tardi books in English -- Jacques Tardi is amazing and one of my all time favorites!--Guy Davis (B.P.R.D., The Marquis)

Tardi is obviously trying to create a Tintin-style feature here. The twists are that the protagonists are villains, and that Tardi takes a mildly parodic tack. [...] His panels are extraordinary; they flow beautifully as a continuity while remaining compelling to look at as single images.--Robert Stanley Martin