Artículos relacionados a All-American Boys: An Insider's Look at the U.S....

All-American Boys: An Insider's Look at the U.S. Space Program 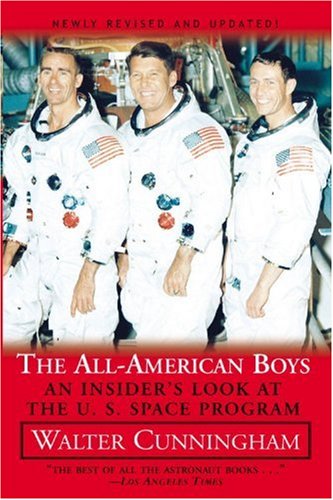 The All-American Boys is a no-holds-barred candid memoir by a former Marine jet jockey and physicist who became NASA's second civilian astronaut. Walter Cunningham presents the astronauts in all their glory in this dramatically revised and updated edition. From its insider's view of the astropolitics that guided the functioning of the astronaut corps to its thoughtful discussion of the Columbia tragedy, The All-American Boys resonates with Cunningham's passion for humanity's destiny in space. Cunningham brings us into NASA's training program and reveals what it takes to be an astronaut. He poignantly relates the story of the devastating Apollo 1 fire that took the lives of three astronauts and his own later successful flight on Apollo 7.

1. All-American Boys: An Insider's Look at the U.S. Space Program

Descripción Paperback. Condición: Very Good. Item is in very good condition. If supplemental codes/CDs for textbooks are required please contact us prior to purchasing as they may be missing. Nş de ref. del artículo: DS-1596873450-2