Artículos relacionados a The Origin of Species (Barnes & Noble Classics) 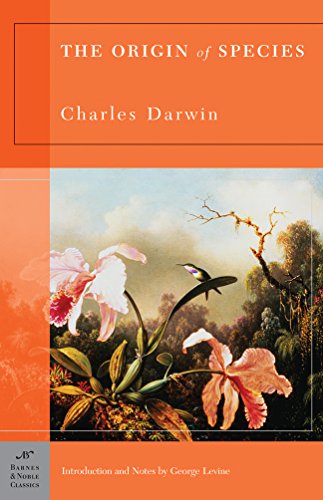 &&LDIV&&R&&LDIV&&R&&LI&&RThe Origin of Species&&L/I&&R, by &&LB&&RCharles Darwin&&L/B&&R, is part of the &&LI&&RBarnes & Noble Classics&&L/I&&R&&LI&&R &&L/I&&Rseries, which offers quality editions at affordable prices to the student and the general reader, including new scholarship, thoughtful design, and pages of carefully crafted extras. Here are some of the remarkable features of &&LI&&RBarnes & Noble Classics&&L/I&&R: &&LDIV&&R New introductions commissioned from today's top writers and scholars Biographies of the authors Chronologies of contemporary historical, biographical, and cultural events Footnotes and endnotes Selective discussions of imitations, parodies, poems, books, plays, paintings, operas, statuary, and films inspired by the work Comments by other famous authors Study questions to challenge the reader's viewpoints and expectations Bibliographies for further reading Indices & Glossaries, when appropriate All editions are beautifully designed and are printed to superior specifications; some include illustrations of historical interest. &&LI&&RBarnes & Noble Classics &&L/I&&Rpulls together a constellation of influences--biographical, historical, and literary--to enrich each reader's understanding of these enduring works.&&L/DIV&&R&&L/DIV&&R&&LP style="MARGIN: 0in 0in 0pt"&&R &&L/P&&R&&LP style="MARGIN: 0in 0in 0pt"&&ROn December 27, 1831, the young naturalist &&LB&&RCharles Darwin&&L/B&&R left Plymouth Harbor aboard the HMS Beagle. For the next five years, he conducted research on plants and animals from around the globe, amassing a body of evidence that would culminate in one of the greatest discoveries in the history of mankind--the theory of evolution. &&L/P&&R&&LP&&RDarwin presented his stunning insights in a landmark book that forever altered the way human beings view themselves and the world they live in. In &&LI&&RThe Origin of Species&&L/I&&R, he convincingly demonstrates the fact of evolution: that existing animals and plants cannot have appeared separately but must have slowly transformed from ancestral creatures. Most important, the book fully explains the mechanism that effects such a transformation: natural selection, the idea that made evolution scientifically intelligible for the first time. &&L/P&&R&&LP&&ROne of the few revolutionary works of science that is engrossingly readable, &&LI&&RThe Origin of Species&&L/I&&R not only launched the science of modern biology but also has influenced virtually all subsequent literary, philosophical, and religious thinking. &&L/P&&R&&LP&&R&&LB&&RGeorge Levine&&L/B&&R, Kenneth Burke Professor of English Literature at Rutgers University, has written extensively about Darwin and the relation of science and literature, particularly in&&LI&&R Darwin and the Novelists&&L/I&&R. He is the author of many related books, including &&LI&&RThe Realistic Imagination, Dying to Know&&L/I&&R, and his birdwatching memoirs, &&LI&&RLifebirds&&L/I&&R. &&L/P&&R&&L/DIV&&R

George Levine, Kenneth Burke Professor of English Literature at Rutgers University, has written extensively about Darwin and the relation of science and literature, particularly in Darwin and the Novelists. He is the author of many related books, including The Realistic Imagination, Dying to Know, and his birdwatching memoirs, Lifebirds.

1. Origin Of Species : By Means of Natural Selection

4. THE ORIGIN OF SPECIES (BARNES &

5. THE ORIGIN OF SPECIES (BARNES &