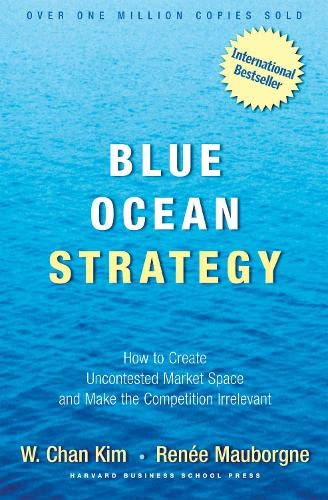 Texto en inglés. Tapa dura con sobrecubierta de editorial ilustrada. Sin subrayados ni anotaciones. Muy Buen estado de conservación. Winning by not competing: a fresh approach to strategy Since the dawn of the industrial age, companies have engaged in head-to-head competition in search of sustained, profitable growth. They have fought for competitive advantage, battled over market share, and struggled for differentiation. Yet these hallmarks of competitive strategy are not the way to create profitable growth in the future. In a book that challenges everything you thought you knew about the requirements for strategic success, W. Chan Kim and Renée Mauborgne argue that cutthroat competition results in nothing but a bloody red ocean of rivals fighting over a shrinking profit pool. Based on a study of 150 strategic moves spanning more than a hundred years and thirty industries, the authors argue that lasting success comes not from battling competitors, but from creating blue oceans: untapped new market spaces ripe for growth. Such strategic moveswhich the authors call value innovationcreate powerful leaps in value that often render rivals obsolete for more than a decade. Blue Ocean Strategy presents a systematic approach to making the competition irrelevant and outlines principles and tools any company can use to create and capture blue oceans. A landmark work that upends traditional thinking about strategy, this book charts a bold new path to winning the future.\n\n

"This breakthrough book is essential for any strategist or entrepreneur who wants to move out of intensively competitive, shark-infested waters and into an opportunity- filled, open ocean." -- Business Insider

Written by the business world's new gurus, Blue Ocean Strategy continues to challenge everything you thought you knew about competing in today’s crowded market place. Based on a study of 150 strategic moves spanning more than a hundred years and thirty industries, authors W. Chan Kim and Renee Mauborgne argue that lasting success comes from creating 'blue oceans': untapped new market spaces ripe from growth. And the business world has caught on- companies around the world are skipping the bloody red oceans of rivals and creating their very own blue oceans. With over one million copies sold world wide, Blue Ocean Strategy is quickly reaching "must read" status among smart business readers. Have you caught the wave?

Descripción Hardcover. Condición: New. Estado de la sobrecubierta: New. Tight, clean and unmarked- " Conventional business models are geared towards operating in the traditional market space. The entrenched view of the marketplace is as one big space where all competitors fight with each other for a share. This creates a blood red ocean where few can survive, and most companies close operations, unable to compete. The blue ocean, on the other hand, is small and tranquil. It might be smaller, but it is much less turbulent. If there is competition, the space is not as crowded and so there is more share for the players. This book concentrates on teaching the readers how to create these blue oceans. It shows them how to redefine the marketplace by being innovative in their ideas. It shows them how to successfully implement these ideas. Blue oceans are created by companies that think differently. Instead of following the herd, they blaze their own trail. One of the examples cited in Blue Ocean Strategy: How To Create Uncontested Market Space And Make The Competition Irrelevant is the Cirque du Soleil. This company redefined the traditional circus The traditional circus had been unable to stand up to emerging competition from movies, television, video games etc. The cost of hiring performers had been going up, while profit margins were becoming narrower. Moreover, there was increasing aversion among the public to the use of animals in these shows. Also, animals were high maintenance properties, costing a lot in food, health care etc. Cirque du Soleil saw these challenges, and decided to avoid these pitfalls altogether They devised a new form of entertainment and targeted a new type of audience. They took the acrobatics of circus acts and gave it a unique twist by adding a theme and storyline to connect these performances. They also added music and dance to the show. By doing all this, they attracted new audience to their shows, including theater audience. Blue Ocean Strategy: How To Create Uncontested Market Space And Make The Competition Irrelevant explains that identifying and creating new market spaces like this results in new niches that make competition irrelevant. The authors show how companies can identify these kinds of opportunities. They explain how to revise their strategies to take advantage of these niches. They also show how to successfully implement these strategies. Printed Pages: 240.". Nş de ref. del artículo: 013105