Artículos relacionados a Review of Contemporary Fiction, Volume XXIX, No. 1:... 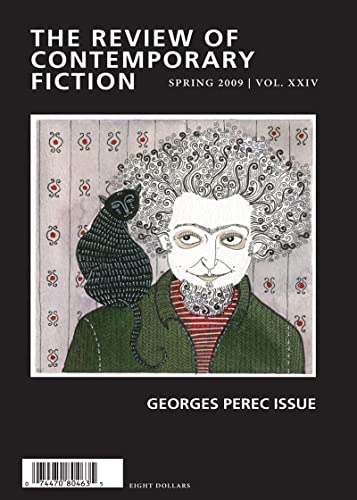 With the participation of editor and translator David Bellos, the Review’s 1993 Georges Perec number is here updated to reflect the state of current Perec studies, and expanded to include a previously unpublished, full-length play written by Perec for German radio, as well as other new texts both by and about Georges Perec.

The Review of Contemporary Fiction was founded in 1981 to promote a vision of literary culture that is not limited to the immediately popular, and to ensure that important world writers outside the popular attention continue to be written about and discussed. In 1984, Dalkey Archive Press was launched as an offshoot of the Review, and while the Press quickly grew into a leading publisher of world fiction, poetry, and criticism, the Review has remained the scholarly partner to the literary books, introducing readers to new authors and traditions or revisiting older writers whose works are of lasting value. Over the years, the Review has also published numerous anthologies of new writing from other countries, often of writers who have never appeared in English before.

To celebrate the publication of a revised translation of Georges Perec's masterpiece, Life: A User's Manual, as well as other debut Perec translations due in 2009, Dalkey Archive is reissuing one of the most popular issues of the Review of Contemporary Fiction in a newly expanded edition.

Descripción Condición: Good. Condition Good: Comment: Book is used and in good condition with some wear from use. This may include wear to dustcover/missing dustcover, inside cover, spine, some highlighting or writing in book, slight curled corners, stains, and wear to the fore edge. All orders ship via UPS Mail Innovations. Thank you for shopping with Goodwill Industries of the Inland Northwest - changing lives through the cycle for good. Nş de ref. del artículo: 4J2MCZ000BPU