Artículos relacionados a The Castle of Otranto

Walpole, Horace The Castle of Otranto

The Castle of Otranto 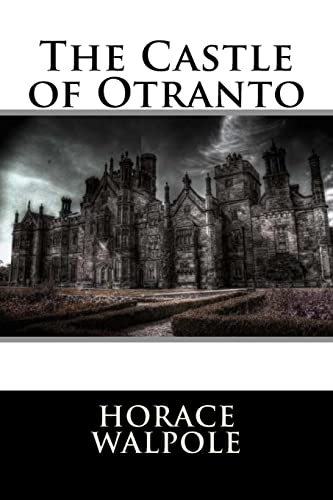 The Castle of Otranto By Horace Walpole

1. The Castle of Otranto (Paperback)

Descripción Createspace Independent Publishing Platform, United States, 2016. Paperback. Condición: New. Language: English. Brand new Book. The Castle of Otranto is a 1764 novel by Horace Walpole. It is generally regarded as the first gothic novel, initiating a literary genre which would become extremely popular in the later 18th century and early 19th century, with authors such as Charles Maturin, Ann Radcliffe, Bram Stoker, Edgar Allan Poe and Daphne du Maurier. *Plot* The Castle of Otranto tells the story of Manfred, lord of the castle, and his family. The book begins on the wedding-day of his sickly son Conrad and princess Isabella. Shortly before the wedding, however, Conrad is crushed to death by a gigantic helmet that falls on him from above. This inexplicable event is particularly ominous in light of an ancient prophecy, "that the castle and lordship of Otranto should pass from the present family, whenever the real owner should be grown too large to inhabit it." Manfred, terrified that Conrad's death signals the beginning of the end for his line, resolves to avert destruction by marrying Isabella himself while divorcing his current wife Hippolita, who he feels has failed to bear him a proper heir. However, as Manfred attempts to marry Isabella, she escapes to a church with the aid of a peasant named Theodore. Manfred orders Theodore's death while talking to the friar Jerome, who ensured Isabella's safety in the church. When Theodore removes his shirt to be killed, Jerome recognises a marking below his shoulder and identifies Theodore as his own son. Jerome begs for his son's life, but Manfred says Jerome must either give up the princess or his son's life. They are interrupted by a trumpet and the entrance of knights from another kingdom who want to deliver Isabella. This leads the knights and Manfred to race to find Isabella. Theodore, having been locked in a tower by Manfred, is freed by Manfred's daughter Matilda. He races to the underground church and finds Isabella. He hides her in a cave and blocks it to protect her from Manfred and ends up fighting one of the mysterious knights. Theodore badly wounds the knight, who turns out to be Isabella's father, Frederic. With that, they all go up to the castle to work things out. Frederic falls in love with Matilda and he and Manfred begin to make a deal about marrying each other's daughters. Manfred, suspecting that Isabella is meeting Theodore in a tryst in the church, takes a knife into the church, where Matilda is meeting Theodore. Thinking his own daughter is Isabella, he stabs her. Theodore is then revealed to be the true prince of Otranto and Matilda dies, leaving Manfred to repent. Theodore becomes king and eventually marries Isabella because she is the only one who can understand his true sorrow. Horatio Walpole, 4th Earl of Orford (24 September 1717 - 2 March 1797) - also known as Horace Walpole - was an English art historian, man of letters, antiquarian and Whig politician. He had Strawberry Hill House built in Twickenham, south-west London, reviving the Gothic style some decades before his Victorian successors. His literary reputation rests on his Gothic novel, The Castle of Otranto (1764) and his Letters, which are of significant social and political interest. He was the son of first British Prime Minister Sir Robert Walpole. As he was childless, his barony descended to his cousin of the same surname, who was created the new Earl of Orford. Nş de ref. del artículo: APC9781536848328

2. The Castle of Otranto

3. The Castle of Otranto

4. The Castle of Otranto

5. The Castle of Otranto