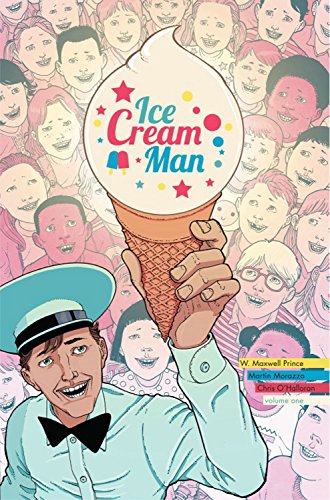 ICE CREAM MAN is a genre-defying comic book series, featuring disparate one-shot tales of sorrow, wonder, and redemption. Each installment features its own cast of strange characters, dealing with their own special sundae of suffering. And on the periphery of all of them, like the twinkly music of his colorful truck, is the Ice Cream Mana weaver of stories, a purveyor of sweet treats. Friend. Foe. God. Demon. The man who with a snap of his fingerslickety split!can change the course of your life forever.

Written by W. MAXWELL PRINCE (ONE WEEK IN THE LIBRARY), with art by MARTN MORAZZO (SNOWFALL,GREAT PACIFIC).

PUBLISHERS WEEKLY -- Summer looms and the suburban air is filled with the cheery jingle of the approaching ice cream man in this caustic, ongoing multigenre anthology of single-issue stories by the same creative team. The purveyor of frosty treats is eagerly anticipated by all, but his friendly demeanor masks miraculous powers and a sinister omnipresence that links the tales. The lives of a young boy with a dark secret and a lethal “friend,” a desperate heroin addict, a washed-up one-hit wonder from the dawn of rock 'n' roll, and a young man wrestling with the fears and uncertainty of impending fatherhood all intersect with Rick, the ice cream man, on his route. As the stories progress, hints are dropped that there is more to Rick than simply serving as a Rod Serling for this contemporary Twilight Zone. Prince's work ups the ante from his earlier efforts (One Week in the Library) with a precisely-crafted page-turner, sporting crisp line work by Morazzo (The Electric Sublime) and the dreamlike colors of O'Halloran (Magnus). This is a perfectly bitter confection for those with a taste for short-form shockers, accented by adult language and content. (June)


“Penciler Martín Morazzo has an evocatively brittle approach to line work and a talent for upsetting facial expressions, and colorist Chris O’Halloran infuses everything with block colors that, like the ice cream, seems simple but contains much sinister import.” —Vulture


"Prince's work ups the ante with a precisely-crafted page-turner, sporting crisp line work by Morazzo and the dreamlike colors of O'Halloran." —Publishers Weekly


“I felt like I was reading Willy Wonka meets The Howling, which would honestly be one of the most epic mashups in comics.” -Horror News Network


“You'll want a scoop of this comic because we're in for a treat.” -Geek.com