Artículos relacionados a The Dark Highlander: 5 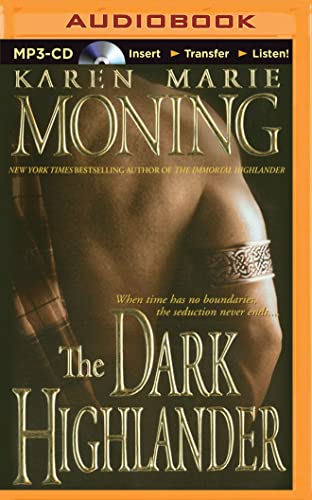 I am Dageus MacKeltar, a man with one good conscience and thirteen bad ones, driven to sate my darkest desires...From his penthouse lair high above Manhattan, Dageus looks out over a glittering city that calls to the darkness within him. A sixteenth-century Scot trapped between worlds, he is fighting a losing battle with the thirteen Druids who possess his soul, dooming him to an eternity of sexual pursuit. When Chloe Zanders, student of antiquities, is drawn into his world, she finds the insatiable alpha male an irresistible lure. Before long, she is caught up in an ancient prophecy that will sweep her back into time to medieval Scotland. Plunged into a world of timeless magic and dark seduction, she will soon face the challenge of a lifetime: fighting thirteen evil spirits for the heart of one irresistible man....

Karen Marie Moning graduated from Purdue University with a bachelor's degree in Society & Law. Her novels have appeared on the New York Times, USA Today, and Publishers Weekly bestseller lists and have won numerous awards, including the prestigious RITA Award.