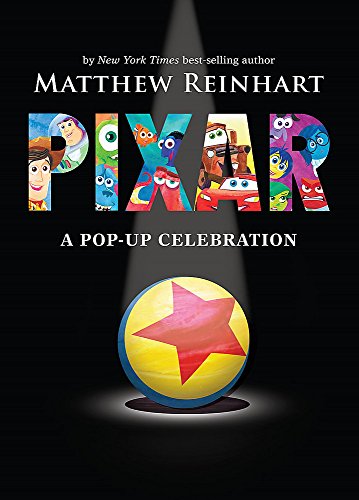 Featuring five spreads with over 30 pop-ups from New York Times best-selling author, artist, and pop-up master Matthew Reinhart, this breathtaking work of art revisits Pixar's impressive history. Like each Pixar movie, each pop contains Easter eggs to other Disney*Pixar films. Disney*Pixar: A Pop-Up Celebration is a vibrant tribute to the beloved canon of Disney*Pixar films and characters.

Matthew Christian Reinhart attended Pratt Institute in Brooklyn as an industrial design major (concentrating in toy design). Pratt was fantastic experience for him, but his initial dreams of being a toy designer soon transformed into paper engineer. After working with Robert on books like The Wonderful Wizard of Oz, A B C Disney, and Movable Mother Goose. Matthew made his first big break into the pop-up world with The Pop Up Book Of Phobias. Many books collaborations have followed, including a trilogy of New York Times best-selling Encyclopedia Prehistorica and the following series Encyclopedia Mythologica with Robert Sabuda, along with Mommy?, co-authored with the renowned Maurice Sendak and Brava Strega Nona with the ageless Tomie DePaola. His solo pop-up books include The Ark, Animal Popposites, The Jungle Book, Cinderella, The Pop-Up Book of Nursery Rhymes, and STAR WARS: Pop-Up Guide to the Galaxy. He continues to work and live in New York City, cutting, taping and folding paper into pop-up masterpieces.