Artículos relacionados a The Idea Of Europe. An Essay

The Idea Of Europe. An Essay

The Idea Of Europe. An Essay 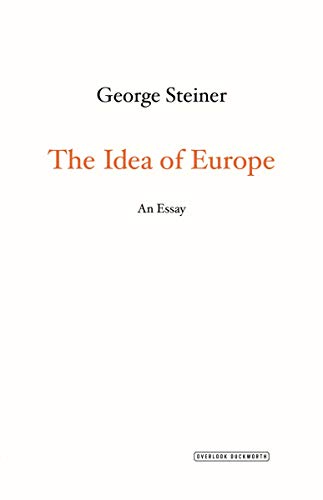 "What lies ahead for Europe after Christianity's loss of cultural dominance is one of the great cultural questions of the century. The celebrated literary critic Steiner addressed this mystery in a widely admired 2003 lecture, now reissued with a long foreword, as a slim hardbound book...this classic essay and its unsparing critique deserve attention." "Publishers Weekly
""George Steiner s "Idea of Europe" challenges us. It is a monument of culture and a challenging and erudite meditation on the idea of Europe and what makes it distinctive....It should probably be compulsory reading for all students in Europe and in the U.S. The Overlook Press, in New York, should be thanked for the initiative of publishing under this title, the Tenth Nexus Lecture of the Intellectual Summit, delivered in 2003, and already a classic....[Steiner] deals with huge topics in a way that makes them simpler than you would think, more important than you had thought, and as poetic as you would wish." "European Institute""

The Idea of Europe finds George Steiner reckoning with Europe from a number of different angles. “Europe,” he writes, “is the place where Goethe’s garden almost borders on Buchenwald, where the house of Corneille abuts on the market-place in which Joan of Arc was hideously done to death.” It is, in other words, a continent rich with contradiction, whose many tensions—cultural, social, political, economic, and religious—have for centuries conspired to pull it apart, even as it has become more and more unified. But what lies ahead for a continent whose borders are growing and economic might is strengthening, even as its cultural identity recedes? A continent where, in Steiner’s words, “young Englishmen choose to rank David Beckham high above Shakespeare and Darwin in their list of national treasures”? This is the trajectory that Steiner explores so brilliantly in The Idea of Europe.

1. The Idea of Europe: An Essay