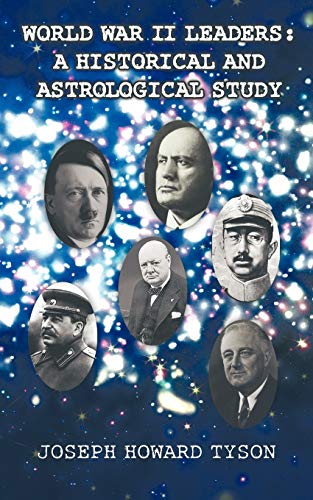 Author Joseph Howard Tyson, who has written biographies of William Penn, Madame Helena P. Blavatsky, Dietrich Eckart, and Adolf Hitler, admits to being a "closet astrologer." In World War II Leaders: A Historical & Astrological Study he puts Astrology to the test by juxtaposing biographical sketches of Mussolini, Hitler, Stalin, Emperor Hirohito, Churchill, and Franklin Roosevelt with detailed interpretations of their natal charts. On another level this work sets forth six different perspectives on the Second World War-- from the standpoints of Germany, Italy, Russia, Japan, Britain, and America. Those interested in history and the occult will find this book an unforgettable reading experience.

Joseph Howard Tyson graduated from LaSalle University in 1969 with a B.A. in Philosophy, took graduate courses in English at Pennsylvania State University, then served in the U.S. Marine Corps. He has worked in the insurance industry since 1972, and lives in the Philadelphia area. He and his wife Christine have four children and three grandchildren. His other books include Penns's Luminous City (2005), Madame Blavatsky Revisited (2006), Hitler's Mentor: Dietrich Eckart, His Life, Times, & Milieu (2008), and The Surreal Reich (2010).