Artículos relacionados a ART OF ZOOTOPIA 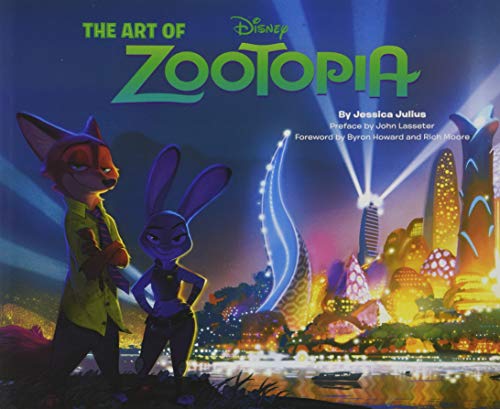 "If you liked Zootopia and (like me) you love seeing what goes into making a movie, you'll love this book. It's filled with concept art and stories about how the movie came to be: for instance, it started off as a spy caper featuring a bunny spy. There's so much thought that went into the design of everything from buildings to vehicles to clothing, and this book gives you the opportunity to get a closer look at it all. There's a chapter on each of the sections of Zootopia, like Tundratown and Little Rodentia-perfect for poring over those blink-and-you-missed-it details from the film."
-Geek Dad

"I had very little expectations one way or the other from it, but wound up enjoying Disney's latest animated feature immensely, which made digging into The Art Of Zootopia even more of a delight. As we've come to expect with these lovely hardcover tomes, it's packed with design and development artwork and insight into the creation of the film."
-A Site Called Fred

"A fantastic companion book to a fantastic movie...The Art of Zootopia is such a treat in the way that it not only revisits the movie's delightfully heartwarming characters and fantastic art, but gives us an engaging look at what went into the making of Zootopia. The book starts with author Jessica Julius describing the movie's original story pitch - a 1960s spy story - and how it evolved over four years into the modern day tale of underdogs, prejudice, and fighting for justice for all. She gives us the scoop on how the characters were developed (balancing a feminine yet tough, naïve yet sharp, optimistic yet challenged bunny cop isn't so easy!), shows us amazing "sets" I don't even remember in the fast-moving film, and she lets us in on all kinds of fun details, like the fact that it took eight months to get the various animals' fur just right (color, texture, and direction of fur growth takes more contemplation than I realized). We are also privy to many sketches and scenes that were eventually cut from the film...The Art of Zootopia is both a captivating companion book to the movie, as well as a stand-alone coffee table book that doesn't need any knowledge of the movie to be appreciated."
-Wink Books

Disney's newest animated feature, Zootopia, is a comedy-adventure starring Officer Judy Hopps, a rookie bunny cop who has to team up with fast-talking scam-artist fox Nick Wilde to crack her first case in the all-animal city of Zootopia. This lushly illustrated book offers a behind-the-scenes view of the elaborate artistry involved in creating the film.

1. The Art of Zootopia

2. The Art of Zootopia

3. The Art of Disney Zootopia

5. The Art of Zootopia

6. The Art of Zootopia

7. The Art of Zootopia

8. The Art of Zootopia (Hardcover)

Descripción 2016. Hardcover. Condición: New. Hardcover. Disney's newest animated feature, Zootopia, is a comedy-adventure starring Officer Judy Hopps, a rookie bunny cop who has to team up with fast-talking scam-artist fox Nick Wil.Shipping may be from our Sydney, NSW warehouse or from our UK or US warehouse, depending on stock availability. 160 pages. 1.200. Nş de ref. del artículo: 9781452122236

9. The Art of Zootopia