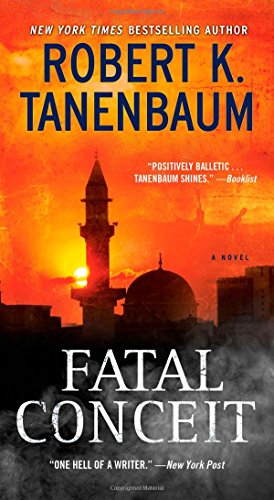 Críticas:
"Butch [Karp] is doing his courtroom dance, making fools of the smug politicians he believes were behind the murder. Tanenbaum shines in these positively balletic moments...[a] reliable thriller."--Booklist

"Readers will find a well-constructed novel, including solid courtroom scenes. Prosecutor Butch Karp...is a talented and likable hero...conservatives will likely love the tone of [Fatal Conceit]."--Kirkus

"Butch Karp is the best fictional prosecuting attorney in literature. . . . Tanenbaum is a phenomenal attorney and a remarkable storyteller: It is almost unfair to the rest of us. . . . Outrage grabs you at the outset and astonishes at each page . . . Riveting."--#1 New York Times bestselling author Mark Lane
Reseńa del editor:
A CIA chief dies under suspicious circumstances before he can testify about a controversial government cover-up involving a terrorist attack on the US mission in Chechnya. Butch Karp is on the case in this exciting installment to Robert K. Tanenbaum’s bestselling series.

When the CIA director is murdered, Butch Karp finds himself battling a heavyweight opponent: the US government. The national presidential election campaign’s foreign policy mantra has been that the terrorists are on the run and Bin Laden is dead. There are rumors that the CIA chief was going to deviate from the administration version of events, and that the government may have had something to do with his death. Can Karp expose the cover-up and find the Chechnyan separatists who aided the Americans at the mission and who have firsthand knowledge of the terrorist attack? Karp must also find his missing daughter, who has been taken hostage by the terrorists.

After the New York grand jury indicts the national presidential campaign chairman and the NSA spymaster for the murder of the CIA chief, Karp engages in an unforgettable courtroom confrontation with the defendants who have the full weight of the US administration, a hostile judge, and a compliant media supporting them. These sinister forces will stop at nothing to prevent Karp from bringing out the truth, even if they have to resort to murder.