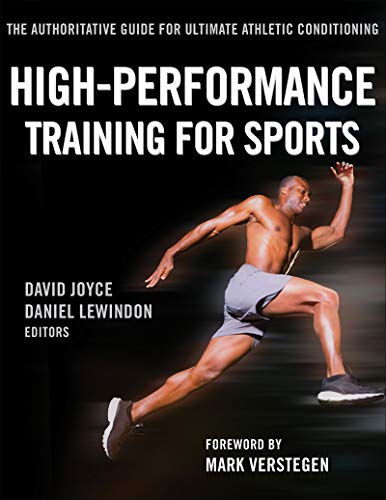 High Performance Training for Sports is predicted to become the most comprehensive sports training manual for dedicated strength and conditioning practitioners and athletes and coaches looking to expand their knowledge on how to develop and optimise human performance and athletic capacity. The book is filled with not only the best and most current research but more importantly, the practical application arising from the research is explained and emphasised through a large variety of programme and exercise prescriptions. Each topic is addressed by a world renowned expert in a specific component of sports conditioning. All chapters will be filled with facts, findings, insights and training prescriptions for enhancing each component of athletic performance. Ten carefully selected chapters are augmented by case studies and interviews with coaches of some the biggest teams/athletes from around the world. This will not only adds depth to the text but enhances the readers' knowledge and understanding of how the most up-to-date science is interpreted and manipulated to create some of the world's best sports performers.

David Joyce worked as a high performance coach and physiotherapist at the last two Olympic Games (2008 with Team Great Britain and 2012 with Team China), as well as multiple World and Continental Championships. He has also worked with teams in the English Premier League, Turkish Super Lig as well as in professional Rugby Union and Rugby League. Dan Lewington is uniquely qualified with postgraduate Masters degrees in both sports science and sports medicine. He has over 10 years experience working full-time in elite sport as a physiotherapist for the England Rugby Union team, a post he has held for over four years. Working as part of a world leading performance team he helps ensure the health and performance of England's best rugby players.

Descripción Paperback. Condición: New. Paperback. High Performance Training for Sports is predicted to become the most comprehensive sports training manual for dedicated strength and conditioning practitioners and athletes and coaches loo.Shipping may be from multiple locations in the US or from the UK, depending on stock availability. 392 pages. 1.040. Nş de ref. del artículo: 9781450444828