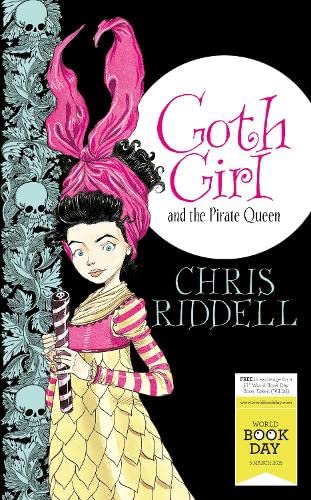 When Ada travels to the seaside resort of Brighton on holiday, she is very excited to meet leading followers of fashion Lady Vivienne Dashwood and her rival, the fashionable shepherd, Beau Peeps. They are there preparing for World Frock Night - a lavish ball where everyone dresses up in their finest costumes to compete for the grand prize. Ada has been given money by her father to buy a spectacular outfit for the ball, and she's excited to be in with a chance of winning the prize. But, as usual, nothing goes to plan, and becoming the belle of the ball will prove to be Ada's biggest challenge yet . . . Full of intricate black and white illustrations, Goth Girl and the Pirate Queen is a gorgeous World Book Day book from Chris Riddell, award-winning author of Goth Girl and the Ghost of a Mouse.

Chris Riddell, the 2015-2017 UK Children's Laureate, is an accomplished artist and the political cartoonist for the Observer. He has enjoyed great acclaim for his books for children. His books have won a number of major prizes, including the 2001, 2004 and 2016 CILIP Kate Greenaway Medals. Goth Girl and the Ghost of a Mouse won the Costa Children's Book Award 2013. His previous work for Macmillan includes the bestselling Ottoline books, The Emperor of Absurdia, and, with Paul Stewart, the Muddle Earth books, the Scavenger series and the Blobheads series. Chris lives in Brighton with his family.