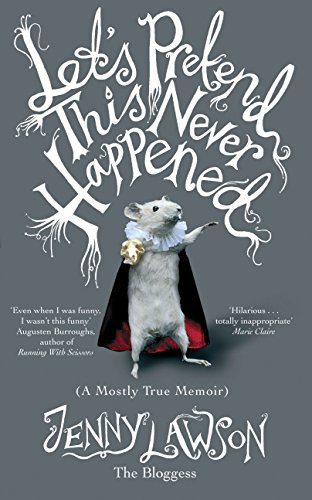 'Jenny Lawson is the QUEEN of saying too much, and then saying something even worse. And that is why I adore her' Caitlin Moran 'GET READY. Jenny Lawson has such a disturbing, ill-mannered, rich sense of humor you will wonder, "Am I the sick one for laughing?" Everyone I gave the book to confirmed: We must all be sick, because this book IS HYSTERICAL ... and yet it was also strangely touching at times. It's one of my favorite books in the past five years.' Kathryn Stockett, # 1 New York Times bestselling author of The Help 'Poignant, funny and insane... a celebration of the strength and character it takes to withstand life's curveballs' Stylist 'Even when I was funny, I wasn't this funny.' Augusten Burroughs, author of Running With Scissors 'Displays the wit that's made her a hit on the Web... hilarious' Booklist 'Lawson writes with a rambling irreverence that makes you wish she were your best friend' Entertainment Weekly Endlessly entertaining and consistently jaw-dropping'. Glamour 'There's something wrong with Jenny Lawson -- magnificently wrong. I defy you to read her work and not hurt yourself laughing.' Jen Lancaster 'Fucked up in the best possible way. Adorably offensive.' Jesus* *Jesus is Jenny Lawson's hairdresser. He pronounces his name differently from that other Jesus. 'Jenny Lawson's writing is nothing less than revolutionary... I say this without a hint of exaggeration: she may be one of the most progressive women's voices of our time.' Karen Walrond, author of The Beauty of Different 'Funny, irreverent... a comic character that readers will engage with in shocked dismay as they gratefully turn the pages'Kirkus 'The funniest memoir ever about a talking squirrel, anxiety disorder, couch etiquette, and more. Believe us, Lawson is hilarious'. Ladies' Home Journal 'Jenny Lawson is hilarious, snarky, witty, totally inappropriate.' Marie Claire 'The Bloggess writes stuff that actually is laugh-out-loud, but you know that really you shouldn't be laughing and probably you'll go to hell for laughing, so maybe you shouldn't read it. That would be safer and wiser.' Neil Gaiman '[A] wondrous knack for bawdy storytelling... Lawson's self-deprecating humour is not only gaspingly funny and wonderfully inappropriate; it also allows her to speak about subjects like depression, anxiety and infertility in a real and raw way'. O Magazine 'Take one part David Sedaris and two parts Chelsea Handler and you'll have some inkling of the cockeyed humor of Jenny Lawson... [She] flaunts the sort of fearless comedic chops that will make you spurt Diet Coke through your nose.' Parade 'Funny, raunchy and unexpectedly uplifting... will leave you hoping that Lawson's next book happens, and soon'. People Magazine 'Zany... hilarious... takes cues from the memoirs of Tina Fey and David Sedaris'. Reuters 'Frankly, it would be hard to grow up free of eccentricities if one's strongest memories of childhood involved a taxidermist father bringing home all manner of fierce creatures, alive and dead... The best and funniest parts of this memoir are the childhood reminiscences...but Lawson also wrings much amusement from the challenge of balancing her eccentricities with the demands of being grown up and having a family of her own' The Herald 'Bawdy, irreverent, searingly honest, big and loud... she keeps her readers in stitches'. The Huffington Post 'A skewering, but deeply affectionate portrait of her family, in the vein of David Sedaris... blends surprising honesty with acerbic wit'. The New York Times 'Lawson's sweet-at-the-core book is really about valuing your family, however crazy they may be' Whole Living Magazine 'Clever is my kryptonite, and Jenny is one of the most clever people on the Internet'. Wil Wheaton

Every teenager wants to fit in and be just like everybody else. So imagine how hard that is when your father runs a taxidermy business out of the family home, your mother runs the student cafeteria, and your sister has just been elected high school mascot, which means she walks the halls in a giant bird costume. But as Jenny Lawson grows up, falls in love, gets engaged - in a way that is as disastrous as it is romantic - and starts a family of her own, she learns that life's most absurd and humiliating moments, the ones we wish we could pretend had never happened, are the very same moments that make us who we are. This is an often poignant, sometimes disturbing, but always hilarious book from a writer that dares to say your deepest and strangest thoughts out loud. Like laughter at a funeral, it is both highly irreverent and impossible to stop once you've started . . .

Descripción Pan Macmillan, 2012. Condición: Good. Ships from the UK. Former Library book. Shows some signs of wear, and may have some markings on the inside. Nş de ref. del artículo: GRP91869651

Descripción Picador, 2012. Paperback. Condición: Used; Good. **SHIPPED FROM UK** We believe you will be completely satisfied with our quick and reliable service. All orders are dispatched as swiftly as possible! Buy with confidence! Aloysius Ihezie. Nş de ref. del artículo: mon0002254187

Descripción Paperback. Condición: Very Good. The book has been read, but is in excellent condition. Pages are intact and not marred by notes or highlighting. The spine remains undamaged. Nş de ref. del artículo: GOR003821343

Descripción Paperback. Condición: Fair. A readable copy of the book which may include some defects such as highlighting and notes. Cover and pages may be creased and show discolouration. Nş de ref. del artículo: GOR004693410