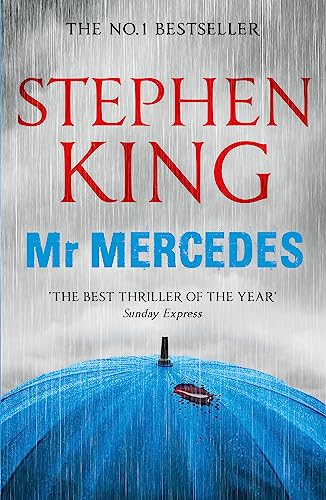 King's gift of storytelling is unrivalled. His ferocious imagination is unlimited. -- George Pelecanos The most remarkable storyteller in modern American literature. -- Mark Lawson * Guardian * America's greatest living novelist. -- Lee Child Hypnotic and creepy, it deserves to be ranked alongside King's masterpieces * Daily Mail * King aficionados will be riveted from the first explosion of violence to the final, equally seismic climax * Financial Times * Nobody can do it quite like Stephen King . . . He's a storyteller; one you'd have listened to for hours, as the sun set and the gulls cried on the dockside at Piraeus * Spectator * Expect page-turning suspense, jaw-dropping twists and all the addictive brilliance of a classic Stephen King * FHM * When it comes to grabbing an audience by the throat and giving them no choice but to keep reading, King has no equal, and I challenge you not to finish this novel in one breathless sitting . . . King transcends genre, and is too warm and compassionate a writer to settle for jaggedly noir suspense. * Guardian * To be held firmly by the hand, through this tough crime thriller by the assured narrative skill of Stephen King, make the act of reading an event. There should have been a sticker on the cover 'no book mark required' * Shots * A tightly plotted crime novel that retains that essential, instantly recognisable flavour that has distinguished King's fiction...On one level, Mr Mercedes is an expertly crafted example of the classic race-against-the-clock thriller. On another, it is a novel of depth and character...rich, resonant, exceptionally readable * Washington Post * Enough to say that Mr Mercedes goes out not with one bang, but several - all satisfyingly unexpected. He's back with a novel different from, but as good as, anything he's previously done * The Times * A thrilling cat-and-mouse game * Irish Mail on Sunday * I challenge you not to read this book in one breathless sitting * Guardian * Stephen King might just be America's greatest living novelist . . . THE BEST THRILLER OF THE YEAR . . . recommended to crime buffs and King fans alike. * Sunday Express *

The first standalone novel in Stephen King's Bill Hodges trilogy (Mr Mercedes, Finders Keepers, End of Watch) - and the basis of Mr Mercedes, an AT&T Audience Original Series starring Brendon Gleeson. Described as 'the best thriller of the year' Sunday Express, the No. 1 bestseller introduces retired cop Bill Hodges in a race against time to apprehend a killer. A cat-and-mouse suspense thriller featuring Bill Hodges, a retired cop who is tormented by 'the Mercedes massacre', a case he never solved. Brady Hartsfield, perpetrator of that notorious crime, has sent Hodges a taunting letter. Now he's preparing to kill again. Each starts to close in on the other in a mega-stakes race against time.

Descripciµn 2015. Paperback. Condiciµn: New. Paperback. The first standalone novel in Stephen King's Bill Hodges trilogy (Mr Mercedes, Finders Keepers, End of Watch) - and the basis of Mr Mercedes, an AT&T Audience Original Series starring Bren.Shipping may be from multiple locations in the US or from the UK, depending on stock availability. 432 pages. 0.290. N¤ de ref. del artÚculo: 9781444788648