Artículos relacionados a Horrid Henry And The Football Fiend: Book 14 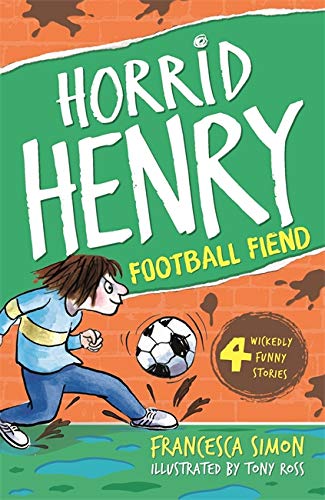 Number One for Fiendish Fun!

This book contains a secret diary, a football match, a shopping trip and a DREADFUL enemy!

Francesca Simon spent her childhood on the beach in California and started writing stories at the age of eight. She wrote her first Horrid Henry book in 1994. Horrid Henry has gone on to conquer the globe; his adventures are published in 27 languages and have sold millions of copies worldwide.

Francesca has won the Children's Book of the Year Award and been a judge for the Guardian Children's Fiction Prize and the Roald Dahl Funny Prize. In 2009, in one of the proudest moments of her career, Francesca was awarded a Gold Blue Peter badge.

Francesca is also a passionate ambassador for children's literacy and is a trustee of the World Book Day charity. She lives in North London with her family.

Tony Ross was born in London and studied at the Liverpool School of Art and Design. He has worked as a cartoonist, a graphic designer, as the Art Director of an advertising agency, and as Senior Lecturer in Art at Manchester Polytechnic.

Tony is one of the most popular and successful children's illustrators of all time, best known for illustrating Horrid Henry and the works of David Walliams. Tony's books have been translated into 40 languages in over 100 countries. He lives in Macclesfield.

Miranda Richardson has appeared in films such as THE HOURS, SLEEPY HOLLOW, THE CRYING GAME, EMPIRE OF THE SUN and HARRY POTTER AND THE GOBLET OF FIRE. TV work includes A DANCE TO THE MUSIC OF TIME, JACKANORY, Queen Elizabeth in BLACKADDER and Queen Mary in THE LOST PRINCE. She has won two Spoken Word awards for her inspired readings of HORRID HENRY AND THE SECRET CLUB and HORRID HENRY'S STINKBOMB audiobooks for Orion.

Horrid Henry and the Football Fiend

Descripción Paperback. Condición: new. Paperback. Number One for Fiendish Fun! This book contains a secret diary, a football match, a shopping trip and a DREADFUL enemy! Four utterly hilarious and totally brilliant Horrid Henry stories by Francesca Simon, with illustrations by Tony Ross. An irresistible introduction to reading for pleasure. Horrid Henry reads Perfect Peter's diary and improves it; goes clothes shopping with Mum and tries to make her buy him some Rootatoot trainers; is horrified when his old enemy Bossy Bill turns up at school; and tries by any means, fair or foul, to win the class football match and defeat Moody Margaret. Shipping may be from multiple locations in the US or from the UK, depending on stock availability. Nş de ref. del artículo: 9781444000993

Horrid Henry and the Football (new)

Horrid Henry and the Football Fiend