ArtŪculos relacionados a Perspectives on Discourse Analysis: Theory and Practice 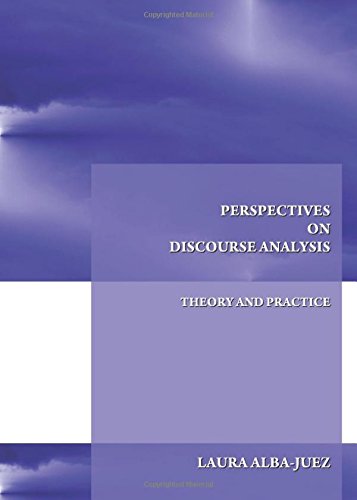 Perspectives on Discourse Analysis: Theory and Practice provides the student/reader with the basic theoretical knowledge and the empirical tools of some of the most relevant approaches to the analysis of discourse. It has been mainly conceived of as a general (university) course on Discourse Analysis, but it can also be useful for any person or group whose main concern is to acquire the basic necessary knowledge and skills for analyzing any type of discourse. The subject matter of the book could not only be of use for linguists or prospective linguists: given its interdisciplinary character, its findings can be (and in fact are) used and applied by practitioners and scholars from different fields, such as sociology, psychology, medical science, computer science, and so on. Thus the book can be used by any person who, having certain linguistic knowledge, is interested in exploring the fascinating world of discourse. All the chapters contain both a theoretical and an empirical section, the latter containing examples of analysis, as well as exercises (Practice) and self-evaluation questions, whose answers can be found at the end of the book (in the Practice key and Key to self-evaluation questions sections). The book is divided into 12 chapters. The first two introduce basic information about discourse analysis and text linguistics, as well as the necessary techniques for gathering data, including a very brief introduction to corpus linguistics. Chapters 3-11 present and discuss some of the most prominent and well-known approaches to discourse analysis, namely Pragmatics, Interactional Sociolinguistics, Conversation Analysis, The Ethnography of Communication, Variation Analysis and Narrative Analysis, Functional Sentence Perspective, Post-Structuralist Theory and Social Theory, Critical Discourse Analysis and Positive Discourse Analysis, and Mediated Discourse Analysis. Finally, Chapter 12 deals with crucial and further issues, such as the type of discourse chosen for the analysis, the strategies and functions of discourse, or the problem of choosing an appropriate unit of analysis which will suit the aims of research. Perspectives on Discourse Analysis: Theory and Practice may prove of value to all those who are professionally involved in the area of discourse and pragmatic studies, or simply to those who wish to acquire the necessary basic knowledge and techniques for analyzing any type of discourse, from medical, journalistic or political discourse to computer-mediated, humoristic, or hegemonic discourse (where the use and abuse of power is an important issue), just to name a few of the innumerable possibilities. A desirable and intended effect of this book is also the development of an open and tolerant mind, which will eventually lead to a better understanding of the different and varied manifestations of language, culture and communication in human society.

Laura Alba-Juez is currently a tenured Professor of Linguistics at the National Distance Education University (UNED) in Madrid, Spain. She received her undergraduate degree in English Linguistics and Literature from the National University of San Juan, Argentina, where she later held different teaching and research positions. She holds a Master's degree in Applied Linguistics from the National Autonomous University of Mexico (UNAM), and a Ph. D. in English Linguistics from the Complutense University of Madrid (UCM), Spain, where she also taught, did research on Linguistics, and coordinated the Master's program in Applied Linguistics for several years. She carried out post-doctoral research as a Visiting Researcher and Scholar in the Linguistics Department at Georgetown University (Washington D. C., U.S.A.), where she subsequently held a Lecturer position for three years in the Spanish and Portuguese Department . She is now in charge of two research projects, and is involved in both undergraduate and graduate teaching within the English Studies Programs (Bachelor, Master's and Doctoral) at the UNED. She is the Director of the Masters programme in the teaching of English as a Foreign Language at the same university, and also participates in the supervision of doctoral theses. Her main areas of research are Discourse Analysis, Pragmatics and Applied Linguistics. She is the author/editor of seven other books, and has published numerous articles in refereed journals on topics such as verbal irony, pragmatic markers, linguistic humor and politeness theory, as well as computerized language teaching and evaluation.