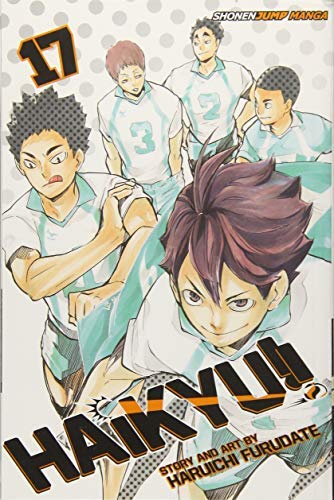 Shoyo Hinata is out to prove that in volleyball you don't need to be tall to fly! Ever since he saw the legendary player known as "the Little Giant" compete at the national volleyball finals, Shoyo Hinata has been aiming to be the best volleyball player ever! Who says you need to be tall to play volleyball when you can jump higher than anyone else? It's the final set of the Spring Tournament qualifier semifinals, and Aoba Johsai has game point! With their backs against the wall yet again, Karasuno digs deep and throws their greatest efforts into one final rally. Will they be able to take the rally and overcome the Great King?! * The manga behind the hit volleyball anime about a boy who has a dream to overcome his physical limits and fly. * Releases 12 times a year for 24+ volumes., Series is ongoing. * Free chapters available on viz.com/shonenjump. * Volume 1 had the highest first month sales of any manga debut in 2016 (July 2016)., * A consistent Bookscan top 50 and New York Times Bestseller (January 2017). * Named one of the Great Graphic Novels for Teens by YALSA (http://www.ala.org/yalsa/2017-great-graphic-novels-teens). * Received prestigious Shogakukan Manga Award for Shonen Category in January 2016.

Haruichi Furudate began his manga career when he was 25 years old with the one-shot Ousama Kid (King Kid), which won an honorable mention for the 14th Jump Treasure Newcomer Manga Prize. His first series, Kiben Gakuha, Yotsuya Sensei no Kaidan (Philosophy School, Yotsuya Sensei's Ghost Stories), was serialized in Weekly Shonen Jump in 2010. In 2012, he began serializing Haikyu!! in Weekly Shonen Jump, where it became his most popular work to date.