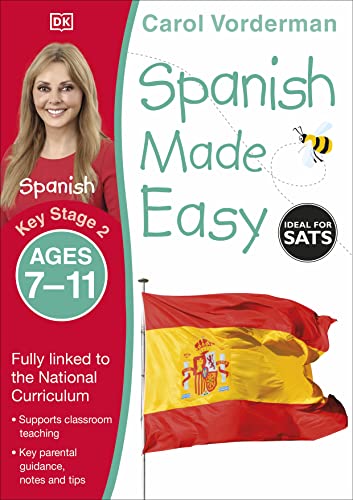 Carol Vorderman guides your child through Spanish words, Spanish grammar, and Spanish pronunciation with this best-selling workbook supporting the curriculum at Key Stage 2.

One in a series of Carol Vorderman books, Spanish Made Easy is packed with interactive exercises and engaging activities. It is perfect for any KS2 child who enjoys Spanish or needs some extra support in learning Spanish grammar and Spanish words, including French verbs.

Vocabulary, spelling, and grammar lessons are broken up into manageable chunks alongside colourful images making Spanish Made Easy fully accessible and understandable for your child. You can get involved too, reward your child with gold stars and fill in the progress chart to positively encourage their learning!

A complete Spanish language course in one book, it helps kids' understanding in all areas, such as pronunciation and grammar, so they really master the language. It also includes fascinating sections on Spanish culture and geography.

Carol Vorderman, one of Britain's best known and loved TV personalities, feels passionately about the value of education. Carol joined forces with DK in 1999 to become DK's Educational Champion and has worked with them to build the bestselling Made Easy Series, which includes Maths, English, Science, and Computer Coding subjects. She has a degree in Engineering from the University of Cambridge and was awarded an MBE for services to broadcasting in 2000.

Descripción Dorling Kindersley Ltd, United Kingdom, 2014. Paperback. Condición: New. UK ed. Language: English. Brand new Book. Help your child be the top of the class with the best-selling home-study series from Carol rol Vorderman can help your child succeed in Spanish with this homeschool learning resource for 7-11 year olds. Spanish Made Easy is one of Carol Vorderman's series of DK workbooks packed with notes and tips to make home learning about Spanish easy and fun! Follow the exercises and activities with your child at home to strengthen their learning in school. Each title contains a progress chart so your child can keep track of all the exercises they have completed and colour in the topic stars as they go. Helpful parents' notes explain what children need to know at each stage and what's being covered in the curriculum so you can support and homeschool your child with confidence.This beginner's book will help your child to learn how to speak Spanish, understand important grammar rules, and build their Spanish vocabulary. Developed in consultation with leading educational experts to support curriculum learning, Spanish Made Easy is a great way to improve your child's Spanish knowledge - "the more you practise, the better you'll be!" (Carol Vorderman). Nş de ref. del artículo: AAZ9781409349389

4. Spanish Made Easy (Language Made Easy)

6. Spanish Made Easy (Language Made Easy)

Descripción Dorling Kindersley Ltd. Paperback / softback. Condición: New. New copy - Usually dispatched within 3 working days. Guides your child through Spanish words, grammar and pronunciation. Packed with interactive exercises and engaging activities, this title strengthens your child's learning and understanding in areas such as how to spell, perfect pronunciation and grammar rules so they really master the language. Nş de ref. del artículo: B9781409349389

9. Spanish Made Easy (Language Made Easy)

10. Spanish Made Easy (Language Made Easy)