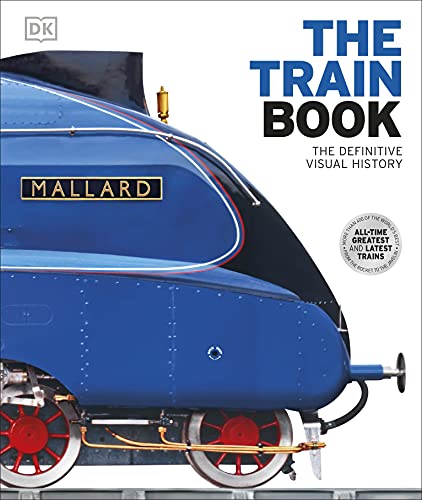 From the first steam trains to the high-speed bullet locomotives of today, this is a glorious celebration of the history of trains and railways. Take a look around the engines of some of the most well-known locomotives in British history, such as the Rocket, the Mallard, and the Javelin, along with famous international trains such as India's Palace on Wheels and America's Thatcher Perkins. Trace the routes of the most important rail routes in history, from the continent-spanning Union-Pacific Railroad and Trans-Siberian Railway to the routes of iconic locomotives such as the Orient Express, the Blue Train, and the Eurostar., And discover the stories of the pioneers of train and track - including George and Robert Stephenson; Isambard Kingdom Brunel, creator of the Great Western Railway; and Fulgence Bienvenue, designer of the Paris Metro. Rounded out by comprehensive photographic catalogues of the most important trains from each period, The Train Book is the perfect gift for any train enthusiast.

The Train Book traces the history and role of trains from the first steam engines to diesel engines and then to today's high-speed bullet trains.

You'll take a journey through the most important trains of each period and see iconic trains such as the Orient Express, the Fairy Queen, the Mallard and the Javelin in incredible detail, discovering the anatomy of these legendary engines. The Train Book gives you a truly international view of trains, exploring some of the world's most impressive rail routes from South Africa to Siberia, including the Darjeeling Himalayan Railway and the high-speed Japanese Tokaido Shinkansen line. You'll discover the stories of key innovators, designers and engineers who advanced rail travel, the challenges they faced and the cultural backdrop against which the railways were built.

The Train Book is the perfect gift for train enthusiasts of all ages.