ArtĒculos relacionados a The Silent Patient: The record-breaking, multimillion... 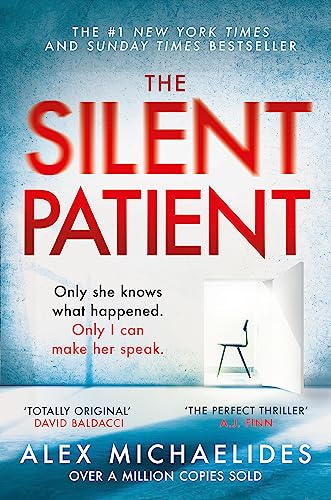 Absolutely brilliant . . . I read it in a state of intense, breathless excitement (STEPHEN FRY)

Masterly plotting, Hitchcockian suspense and an absolute jaw-dropper of an ending. Read this book! (LUCY FOLEY, bestselling author of THE HUNTING PARTY)

Intelligent, imaginative and a terrific read (THE TIMES - Crime Book of the Month)

I read it in two nights and savoured every luscious word, every grim encounter, every startling twist (DAVID BALDACCI)

The perfect thriller. I quite literally couldn't put it down (A. J. Finn, bestselling author of THE WOMAN IN THE WINDOW)

A taut, meticulously plotted and compelling novel (THE OBSERVER)

The Silent Patient may be a first novel, but it has the pace and finesse of a master (BBC CULTURE)

One of the best thrillers I've read this year. Masterfully plotted and brilliantly paced by a writer at the top of his game (CARA HUNTER, Sunday Times bestselling author of CLOSE TO HOME)

A superior psycho-thriller (THE TIMES)

WITH OVER A MILLION COPIES SOLD, read the Sunday Times and No.1 New York Times bestselling, record-breaking 2019 thriller that everyone is talking about - soon to be a major film.

Terrific' - THE TIMES Crime Book of the Month

'One of the best thrillers I've read this year' - CARA HUNTER

'The pace and finesse of a master' - BBC CULTURE

Alicia Berenson lived a seemingly perfect life until one day six years ago.

When she shot her husband in the head five times.

Since then she hasn't spoken a single word.

It's time to find out why.

THE SILENT PATIENT is the gripping must-read debut thriller of 2019 - perfect for fans of THE WOMAN IN THE WINDOW by A.J. Finn and THE GIRL BEFORE by JP Delaney.

Descripci¾n ORION, 2019. Paperback. Condici¾n: New. Paperback. I love him so totally, completely, sometimes it threatens to overwhelm me. Sometimes I think . . . No. I won't write about that. ALICIAAlicia Berenson writes a diary as a release, an outle.Shipping may be from multiple locations in the US or from the UK, depending on stock availability. 352 pages. 0.200. N║ de ref. del artĒculo: 9781409181637