Artículos relacionados a The Hairy Bikers' One Pot Wonders: Over 100 delicious... 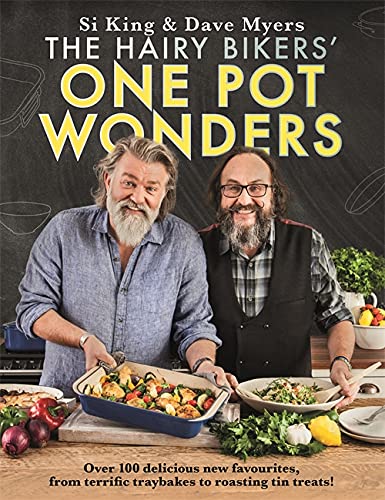 Life is complicated enough so why not let Si King and Dave Myers, AKA the Hairy Bikers, make it just that bit easier?

Whether it's inspiration for supper after a hard day's work or a slow roast feast for a weekend gathering, One Pot Wonders has it all. From rich and warming tray bakes to light but satisfying salads, these triple-tested recipes deliver on flavour and cut out the fuss.

This is Si and Dave's most wonderful collection yet, with chapters on breakfasts and brunches, soups and salads, satisfying stews, quick one pot carbs, tarts and tray bakes, stovetop suppers, pies and pot roasts, and puds and cakes - this book is a belter!

Enjoy savoury classics like Sausage and Bean tray bake and Showstopper Quiche, or the sweet delights of Rhubarb and Orange Crumble and Boozy Syllabub Trifle, there's so much here to tickle the taste buds and get your cooking mojo back into the kitchen.

So dial back the effort and turn up the flavour with Si and Dave's One Pot Wonders!

Born and bred in Barrow-in-Furness, Dave Myers' versatile skills have taken him to some unusual places. He worked in a steelworks as a student, to finance his studies in Fine Arts, and later joined the BBC as a make-up artist, specialising in prosthetics.

Si King hails from North East England and is a big, blond bearded biker with an infectious laugh. He worked for many years as an Assistant Director and Locations Manager for film and television, including the Harry Potter films.

Si and Dave met on the set of a TV drama in 1995 and have been cooking and riding together ever since. They have now written 19 cookbooks, including The Hairy Bikers' Mediterranean Adventure, Chicken & Egg, Mums Know Best, The Hairy Bikers' Big Book of Baking, Meat Feasts and 12 Days of Christmas. In 2012, the boys shed more than six stone between them on the TV show The Hairy Dieters: How to Love Food and Lose Weight and launched a publishing phenomenon. They have also published an acclaimed autobiography, Blood, Sweat & Tyres.

Selling in excess of 5.7 million copies of their books, Si and Dave continue to entertain and inspire with their innovative publishing and heartwarming TV shows.