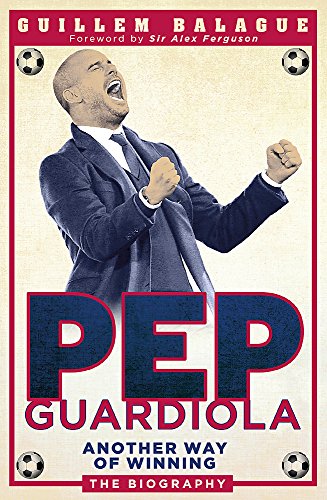 Balague's insightful biography presents Guardiola as a relentless perfectionist - a man obsessed with the minutiae of football, often unable to switch off. (SPORT)

It's a must-read for anyone who's doubted Pep's influence, from handing the power to Barça's homegrown crop to never betraying his childhood romanticism of the game.

'Pep' Guardiola has transformed Barcelona into arguably the greatest club side of all time, and this entertainingly perceptive biography explains how.

Guardiola spent the majority of his playing days with Barca and was an integral part of Johan Cruyff's European Cup-winning 'dream team'. But it was on retiring from playing that he really made his mark on the club. After travelling the world, he became a coach of the Barcelona reserve team, and a year later, in 2008, he was appointed the first-team manager. The club went on to win an unprecedented 13 of the 16 competitions they entered under his leadership, and he became the youngest ever manager to win the Champions League. Then, at the end of the 2012 season, after having been awarded the FIFA WORLD COACH OF THE YEAR, he resigned following four years of unprecedented achievement. He immediately became the most sought-after free-agent in football, and his next move was keenly anticipated.

Some call Guardiola's influence on Barca revolution, others evolution. Whatever the answer, the impact he has had goes beyond football. He represents a style, a club, a country and even old-fashioned values, at a time when they seem so scarce. Guillem Balagué's insightful book reveals how Pep Guardiola's Barcelona played the 'Beautiful Game' - and won.

1. Pep Guardiola: Another Way of Winning

2. Pep Guardiola: Another Way of Winning