Artículos relacionados a The Man of Numbers: Fibonacci's Arithmetic Revolution 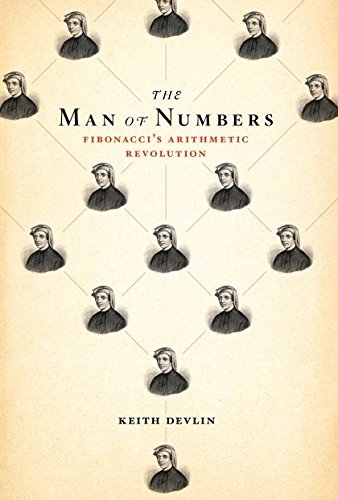 PRAISE FOR 'LIFE BY NUMBERS' 'Not in many, many years have I seen a book nearly as instructive, enlightening, and sheer fun about the beauty of mathematics. Life by Numbers is truly superb' * Amir Aczel, author of Fermat's Last Theorem * 'A beautiful book ... The aim is not to teach but to entertain, and it succeeds. The view that mathematics is dull is replaced by an image of how math can be both interesting and useful' * New Scientist *

In 1202, a 32-year old Italian finished one of the most influential books of all time, which introduced modern arithmetic to Western Europe. Devised in India in the seventh and eighth centuries and brought to North Africa by Muslim traders, the Hindu-Arabic system helped transform the West into the dominant force in science, technology, and commerce, leaving behind Muslim cultures which had long known it but had failed to see its potential. The young Italian, Leonardo of Pisa (better known today as Fibonacci), had learned the Hindu number system when he traveled to North Africa with his father, a customs agent. The book he created was Liber abbaci, the `Book of Calculation', and the revolution that followed its publication was enormous. Arithmetic made it possible for ordinary people to buy and sell goods, convert currencies, and keep accurate records of possessions more readily than ever before. Liber abbaci's publication led directly to large-scale international commerce and the scientific revolution of the Renaissance. Yet despite the ubiquity of his discoveries, Leonardo of Pisa remains an enigma. His name is best known today in association with an exercise in Liber abbaci whose solution gives rise to a sequence of numbers - the Fibonacci sequence - used by some to predict the rise and fall of financial markets, and evident in myriad biological structures. In The Man of Numbers, Keith Devlin recreates the life and enduring legacy of an overlooked genius, and in the process makes clear how central numbers and mathematics are to our daily lives.