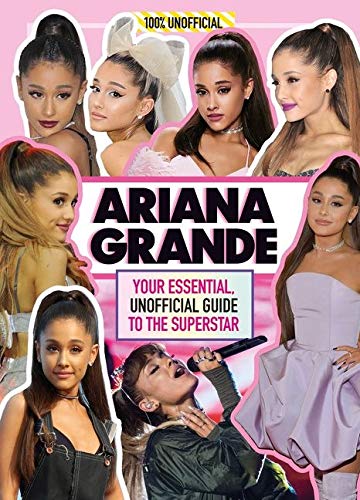 Ariana is not just the ponytailed princess of pop, she is one of the world's biggest stars, every album and every single she releases tops the chart, she is the number one most followed female on Instagram, a fierce advocate for women's rights, and a supporter of the LGBT+ community, she's a businesswoman, an actress, and a survivor, who puts family first, and that includes seven rescue dogs. If anyone thinks they can come for her crown, we've got three words for them , "thank you, next."

With two decades experience in entertainment journalism Malcolm Mackenzie knows pop culture. He successfully launched the teen magazine, We Love Pop in 2011, winning a BSME award for best Editor. He also launched Oh My Vlog, a magazine for the YouTube generation and has written for publications including The Guardian, GQ, Grazia and Glamour ... basically anything with a 'G'. He is the author of several books about pop culture.

3. Ariana Grande 100% Unofficial: Your essential, unofficial guide to the superstar

Descripción HarperCollins Publishers, United Kingdom, 2019. Hardback. Condición: New. Language: English. Brand new Book. Your essential unofficial guide to Ariana Grande! Whether you're getting ready for her 2019 Sweetener World Tour or looking to increase your popstar knowledge and become an Arianator, this book will teach you about all things Ari! Packed with pictures, facts and rankings of Ariana Grande's albums and singles, it will go perfectly with the Ariana Grande merchandise you already have. Your Ariana Grande 100% Unofficial book includes:10 Ariana secretsAri's best music videosHow Ariana Grande went from Nickelodeon to global popstarAll the music awards Ari has wonA ranking of her albums, including Thank U Next, My Everything, Dangerous Woman, Sweetener and moreAriana Grande's famous BBFs such as Ed Sheeran and Taylor SwiftWho Ari follows on Instagram and how she nails social mediaAnd of course lots of photographs to show Ariana Grande as a performer, fashion icon, activist and family girl. Nş de ref. del artículo: AA89781405295956

5. Ariana Grande 100% Unofficial: Your essential, unofficial guide to the superstar

7. Ariana Grande 100% Unofficial: Your essential, unofficial guide to the superstar