Artículos relacionados a A Reader's Guide to Contemporary Literary Theory 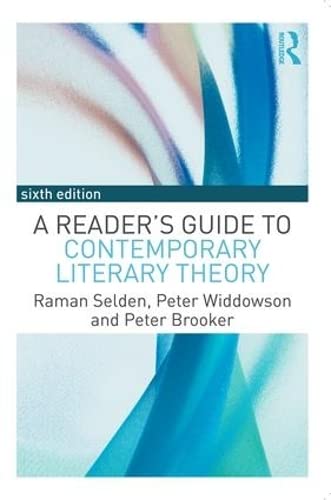 A Reader’s Guide to Contemporary Literary Theory is a classic introduction to the complex yet crucial area of literary theory. This book is known for its clear, accessible style and its thorough, logical approach, guiding the reader through the essentials of literary theory. It includes two new chapters: ‘New Materialisms’ which incorporates ecocriticism, animal studies, posthumanism and thing theory; ‘21st Century and Future Developments’ which includes technology, digital humanities, ethics and affect.

Raman Selden was Professor of English at Lancaster University and Sunderland Polytechnic. He is remembered with lasting admiration for his contribution to 17th century studies and especially for his pioneering and lucid introductions of literary theory. His warmth, commitment and energy remain an inspiration to former colleagues and students.

Peter Widdowson was Professor of English at the Universities of Middlesex, Brighton and Gloucester. He was able uniquely to combine seriousness with wit and good humour. His strong and questioning historical sense, evident in his teaching and notably in his work on Thomas Hardy and on the ramifications of contemporary theory, remains a model for younger scholars.

Peter Brooker is Emeritus Professor in the Department of Culture, Film and Media at the University of Nottingham, United Kingdom. He is the author of A Glossary of Literary and Cultural Theory (Routledge, 2016) and Bertolt Brecht: Dialectics, Poetry, Politics (Routledge Revivals, 2016).

Descripción 2016. Paperback. Condición: New. 6th. Paperback. A Reader's Guide to Contemporary Literary Theory is a classic introduction to the complex yet crucial area of literary theory. This book is known for its clear, accessible style and its th.Shipping may be from multiple locations in the US or from the UK, depending on stock availability. 308 pages. 0.435. Nş de ref. del artículo: 9781138917460