Artículos relacionados a Festive Funerals in Early Modern Italy: The Art and... 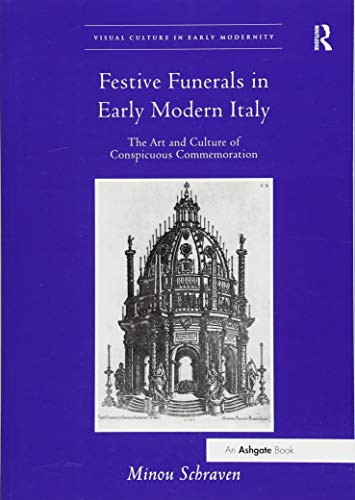 Celebrated at the heart of a notoriously unstable period, the Vacant See, papal funerals in early modern Rome easily fell prey to ceremonial chaos and disorder. Charged with maintaining decorum, papal Masters of Ceremonies supervised all aspects of the funeral, from the correct handling of the papal body to the construction of the funeral apparato: the temporary decorations used during the funeral masses in St Peter’s. The visual and liturgical centre of this apparato was the chapelle ardente or castrum doloris: a baldachin-like structure standing over the body of the deceased, decorated with coats of arms, precious textiles and hundreds of burning candles. Drawing from printed festival books and previously unpublished sources, such as ceremonial diaries and diplomatic correspondence, this book offers the first comprehensive overview of the development of early modern funeral apparati. What was their function in funeral liturgy and early modern festival culture at large? How did the papal funeral apparati compare to those of cardinals, the Spanish and French monarchy, and the Medici court in Florence? And most importantly, how did contemporaries perceive and judge them? By the late sixteenth century, new trends in conspicuous commemoration had rendered the traditional papal funeral apparati in St Peter’s obsolete. The author shows how papal families wishing to honor their uncles according to the new standards needed to invent ceremonial opportunities from scratch, showing off dynastic resilience, while modelling the deceased’s memoria after carefully constructed ideals of post-Tridentine sainthood.

1. Festive Funerals in Early Modern Italy: The Art and Culture of Conspicuous Commemoration

2. Festive Funerals in Early Modern Italy: The Art and Culture of Conspicuous Commemoration

3. Festive Funerals in Early Modern Italy: The Art and Culture of Conspicuous Commemoration