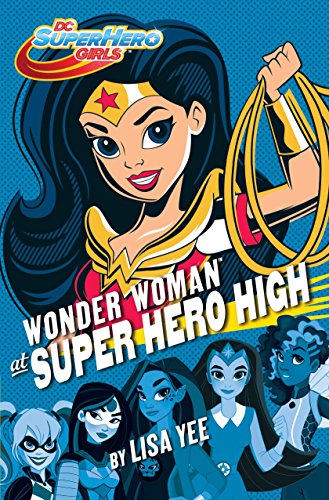 Get your cape on with the DC Super Hero Girls™—the unprecedented new Super Hero universe especially for girls! Readers of all ages can fly high with the all-new adventures of Wonder Woman™, Supergirl™, Batgirl™, and some of the world’s most iconic female super heroes as high schoolers!

Wonder Woman is an Amazon Warrior and Princess. She has never left her home on Paradise Island. But she wants to be a super hero—the very best super hero she can be. In order to train at the most elite school in the galaxy, she has to juggle acing her classes, forging new friendships, trying to make the team for the Super Hero Super Triathlon, and her insane suite-mate sharing her every embarrassing moment on social media. Not to mention . . . Wonder Woman has never seen a boy before. High school is going to be harder than she thought.

Award-winning author Lisa Yee brings this edge-of-your-seat adventure to life with mystery, thrills, and laughs. Move over Batman™ and Superman™—the DC Super Hero Girls are ready to save the day and have fun doing it!

Praise for DC Super Hero Girls:
“Sure to have wide appeal, this book is a solid option to balance collections saturated with male superheroes.” —School Library Journal

"If you have a middle grader in your life looking for super-sized action, or a superhero enthusiast who isn’t sure where to turn to get more of the superheroes they might see on TV or in movies... Or if you just want to dive into a good book that shows young readers—especially young female readers—that girls can be the super heroes of their own stories, look no further: Super Hero High is for you." - Kirkus

Lisa Yee’s debut novel, Millicent Min, Girl Genius, won the prestigious Sid Fleischman Humor Award. Her other novels for young people, with nearly two million copies in print, include Stanford Wong Flunks Big-Time, So Totally Emily Ebers, Absolutely Maybe, and two books about a fourth grader, Bobby vs. Girls (Accidentally) and Bobby the Brave (Sometimes). Lisa is also the author of American Girl’s Kanani books and Good Luck, Ivy. Her recent novel, Warp Speed, is about a Star Trek geek who gets beat up every day at school.

Lisa is a former Thurber House Children’s Writer-in-Residence whose books have been chosen as an NPR Best Summer Read, a Sports Illustrated Kids Hot Summer Read, and a USA Today Critics’ Top Pick.

Visit Lisa at lisayee.com or check out her blog at lisayee.livejournal.com.