Artículos relacionados a The English and Their History

Tombs, Robert The English and Their History

The English and Their History 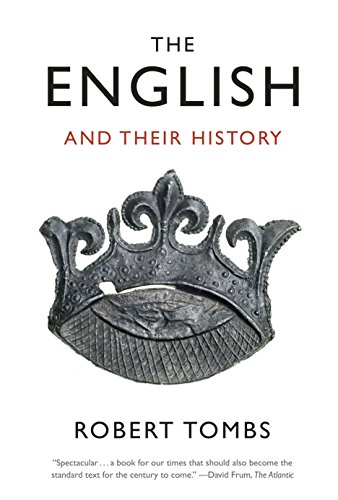 Named a Book of the Year by the Daily Telegraph, Times Literary Supplement, The Times, Spectator, and The Economist

"Spectacular and massive. . . . It's a book for our times that should also become the standard text for the century to come." --David Frum, The Atlantic

"The English and Their History," by Robert Tombs, is right to combine a fresh retelling of English history with a thoughtful analysis of the changing ways in which the English themselves have interpreted their past. It successfully does both. . . . In this book he bicycles -pleasingly through the picturesque valleys and stormy moorlands of England's long adversarial struggle with itself. . . . Tombs entertainingly describes England's frequent aggressive adventures into other people's countries, not least its immediate -neighbors." --Peter Hitchens, The New York Times Book Review "Robert Tombs's The English and their History is history at its best. He gives a fluent, elegant and abundantly energetic narrative from the Bronze Age to the Scottish Referendum of 2014....The final section of the book, covering the last half-century, is a triumph of precision and candour: I have not read history that is so important and exciting for years." --Richard Davenport-Hines, Times Litereary Supplement (Books of the Year) "As ambitious as it is successful....Packed with telling detail and told with gentle, sardonic wit, this vast and delightful book is exactly the weapon to throw at those who apologise for the past, denigrate the present and fear the future." --Ben Macintyre, The Times (Books of the Year) "In his massive, engaging and persuasive new book, Robert Tombs speaks up for English history, and sometimes for England itself." --David Horspool, The Guardian "The English and Their History, by the Professor of French history at Cambridge, Robert Tombs, is a work of supreme intelligence. In this vigorous, subtle and penetrating book, Tombs defies the proprieties of our politically motivated national history curriculum to rethink and revise notions of national identity. Tombs has done nothing less than narrate with rare freshness and confidence 2,000 years of English history....Although he is a historian of the grand sweep, his book is full of arresting details, quirky sidelights, telling quotes and delightful laconic humour.... Robert Tombs's book is a triumph. In a literal sense it is definitive, for there is never a flash of ambiguity in any sentence....No history published this year has been of such resounding important to contemporary debates. Tombs, who is both fearless and non-partisan, deserves to be rewarded with a life peerage for this book. There can be no steadier, calmer and more informed adviser during the constitutional crises looming in the next two or three years." --Richard Davenport-Hines, The Observer "Tombs has succeeded magnificently. Learned, pithy and punchy, with a laudable sense of narrative sweep and a bracing willingness to offer bold judgments, his survey is a tremendous achievement, and deserves to become the standard history for years to come....All in all, Tombs's book is a superb feat of compression and analysis." --Dominic Sandbrook, Sunday Times "[A] compelling and intriguing analysis....vast in scope and full to the brim with scholarship that has been painstakingly absorbed only to be disgorged with an exhilarating mixture of conviction and lightness of touch." --Christopher Silvester, Financial Times

"Fascinating....I found it especially strong on English-French relations, and early modern times....Definitely recommended, I quickly became addicted to this book." --Tyler Cowen, "Marginal Revolution" "Conducting a vast yet readable and sharply focused tour through the ages, and contrasting the English with their Celtic and continental neighbours, the thread is the evolution and paradoxical elusiveness of Englishness....jammed with succulent nuggets." --Sinclair McKay, Daily Telegraph (Books of the Year) "Robert Tombs's timely and magisterial The English and their History ... [is] a great achievement: you're in the hands of a learned and considerate guide whose judgments, whether you agree with them or not, you can be sure will be well-founded. A very good read and possibly the most important contribution to the subject since Trevelyan." --Alan Judd, Spectator (Books of the Year) "The perfect starting point for anyone who wants to grapple with the complexity of the English question....[Tombs] writes beautifully; there isn't a lazy sentence in this text."--The Economist

"Commanding. . . . a brilliant distillation of a vast tale and arguably the finest one-volume history of any nation and people ever written. . . . Tombs succeeds, all the while clearly stating the bases for his judicious assessments. His lively coverage of social, cultural, and political history is dazzling. . . . It's hard to identify a source Tombs hasn't consulted or an apt quotation he's neglected to slip in. Comprehensive, authoritative, and readable to a fault, this book should be on the shelves of everyone interested in its subject." --Publishers Weekly (Starred) "Massive yet accessible. . . . wonderfully reasoned and tidily structured...surprisingly approachable. . . . lucid, engaging, and pleasantly nondidactic. ."--Kirkus (Starred) Reseńa del editor:

Named a Book of the Year by the Daily Telegraph, Times Literary Supplement, The Times, Spectator, and The Economist

The English first materialized as an idea, before they had a common ruler and before the country they lived in even had a name. From the armed Saxon bands that descended onto Roman-controlled Britain in the fifth century to the travails of the Eurozone plaguing the prime-ministership of today's multicultural England, acclaimed historian Robert Tombs presents a momentous and challenging history of a people who have a claim to be the oldest nation in existence.

Drawing on a wealth of recent scholarship, Tombs sheds light on the strength and resilience of English governance, the deep patterns of division among the people who have populated the British Isles, the persistent capacity of the English to come together in the face of danger, and not the least the ways the English have understood their own history, have argued about it, forgotten it and yet been shaped by it. Momentous and definitive, The English and Their History is the first single-volume work on this scale for more than half a century.

1. The English and Their History

2. The English And Their History

3. The English and Their History (Paperback or Softback)

4. The English and Their History

5. The English and Their History

6. The English and Their History

7. The English and Their History

8. The English and Their History

9. The English and Their History (Paperback)

Descripción Paperback. Condición: New. Paperback. Named a Book of the Year by the Daily Telegraph, Times Literary Supplement, The Times, Spectator, and The Economist The English first materialized as an idea, before they had a common rule.Shipping may be from multiple locations in the US or from the UK, depending on stock availability. 1040 pages. 1.388. Nş de ref. del artículo: 9781101873366

10. The English and Their History