Artículos relacionados a Rapture Reality Check: All it takes is three passages...

Lewis, Nathanael Rapture Reality Check: All it takes is three passages and one verse ... simple!

Rapture Reality Check: All it takes is three passages and one verse ... simple! 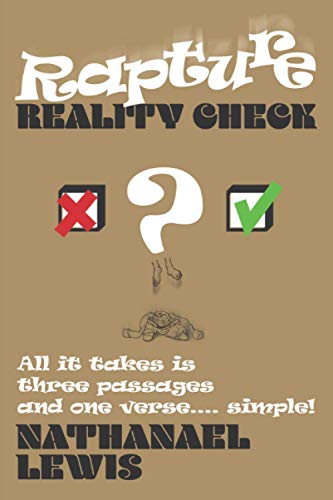 1. Rapture Reality Check: All it takes is three passages and one verse . simple! (Paperback)

Descripción Independently Published, United States, 2016. Paperback. Condición: New. Language: English. Brand new Book. For nearly two centuries, a cancer has been eating away at biblical truth. That can be said in many fields, but there is one cancer that is particularly chameleon-like in that it masquerades as supremely biblical, and condemns all other views as deficient - the belief in a so-called 'Pre-Tribulation' rapture. Its proponents wield a huge array of atomized proof texts and seemingly biblical concepts such as 'imminence', and carry the popular conservative evangelical culture with them. Here theologian Nathanael Lewis, who has written three extensively researched books on the subject - * 'Rapture Rupture: The Big Lie behind 'Left Behind' Exposed' * 'Falsifying the Fathers' * 'The Rapture Trap' . offers a short, simple but not simplistic work that examines three key passages as a whole, plus one bible verse that together show the real Rapture teaching of the Bible, one that is the complete opposite of the 'Left Behind' heresy, and that has real, eternal implications for Christians living in the last days. He shows how Paul in his letters to the Thessalonians follows in detail the teaching of Jesus in Matthew 24, and also how the very first thing Jesus did in teaching his disciples about the last days was to warn against false teachers preaching 'imminence' - which is the beating heart of the Pre-Tribulation doctrine. In fact, Jesus' warning about such teachers was simple: 'Do not be deceived . Do not follow them.' It is time we heeded Jesus' warning, and this book is a great place to start. Nathanael Lewis is a sinner saved by grace, a flawed but loved adopted son of the Heavenly Father, a theologian, a poet, a musician and composer, and a human rights activist and champion for persecuted Pakistani Christians. You can find more about his work at . At least 2.5% of profits from this book will go to help persecuted Christians, mainly in Pakistan or the Middle East. Nş de ref. del artículo: APC9781076000460