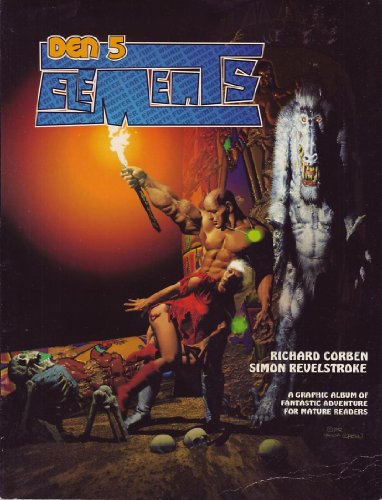 Descripción Fantagor Press, 1992. Hardcover. Condición: New. Richard Corben Ilustrador. Limited Edition. ***Caution >>> Contains Adult/Mature content*** Den #5: Elements Signed & Numbered Limited Hardcover. Limited to 200. A Graphic Album of Fantastic Adventure for Mature Readers. Den's original adventure in a high quality format! Den is a young man named David Ellis Norman. Following directions left for him on a note and a diagram from his missing uncle Dan, David builds another electronic apparatus. The apparatus opens a gateway to a fantasy world named "Neverwhere", where he was transformed into a hairless, nude, muscular, above-normal strength with martial arts fighting skills; prodigiously sexually endowed adventurer. Confused by his strange trip, he can only remember the acronym of his real name (DEN), and begins calling himself "Den". Den's exploits. lusty and brawling, brimming with magic, intrigue, horror and betrayal. Tim Pilcher calls Den "Conan on Viagra". Back in top, strapping shape, the second Den is reunited with a woman whom he believes to be Kath, who actually talks like she is Kil. Eventually, she is revealed to indeed be Kil, the Red Queen. She has brought Kath back to Neverwhere and when asked to choose between them, Den chooses the Red Queen. After a great explosion at the end of the story, Den is alone and unconscious and is rescued by his friends Zandor and Wyn. Hardcover collects: Den's exploits in Fantastic Adventures (1988) Issues #4-7. Limited Edition Hardcover of Richard Corben's Den 5 Elements is signed on the front title page with a black & white illustration of Den and is personally autographed by Richard Corben. The signed title page states that it is numbered out of 200. Limited Hardcover is bagged and will be carefully / securely packaged then shipped via USPS Priority Mail to insure that it arrives to you perfectly and quickly. Limited Hardcover is in Very Fine to Near Mint condition. {(very slight imperfections), pages are clean w/ tight spine} Like NEW! Very Beautiful! Please See Scans!! THIS IS AN OVER-SIZED ITEM THAT WILL REQUIRE AN ADDITIONAL SHIPPING CHARGE FOR ALL INTERNATIONAL BUYERS!. Signed by Author(s). Nş de ref. del artículo: 4192