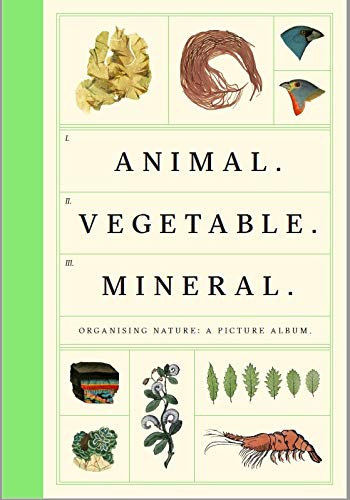 Compact and charming --Caught by the River, Book of the Month

Charts, diagrams, maps, lists and illustrations...delightful in their intricate and informative detail. --It s Nice That

Published to accompany a major year-long exhibition, Making Nature at the Wellcome Collection, Animal Vegetable Mineral celebrates the beauty and strangeness of the very early ‘infographics’, charts, and ordering systems devised in an age that transformed how we see and understand nature.

These are the tools created by pioneering European naturists, artists, scientists, housewives and explorers in the 18th and 19th centuries, in an attempt to better understand (and control) a teeming and shifting natural world: the original big data challenge. In a collision of science, art and imagination, these images and objects range from intricate specimen illustrations, taxonomy charts, and animal distribution maps, to lavish colour dictionaries, and more.

Together, they attest to the deeply human desire to order and identify the world around us – and a restless quest to find our own place in it.

Comprar usado
Condici¾n: Bien
The book has been read, but is... Ver este artĒculo

Descripci¾n Paperback. Condici¾n: Very Good. The book has been read, but is in excellent condition. Pages are intact and not marred by notes or highlighting. The spine remains undamaged. N║ de ref. del artĒculo: GOR008456991

Descripci¾n Wellcome Collection, 2016. Hardcover. Condici¾n: Good. Good condition is defined as: a copy that has been read but remains in clean condition. All of the pages are intact and the cover is intact and the spine may show signs of wear. The book may have minor markings which are not specifically mentioned. Most items will be dispatched the same or the next working day. N║ de ref. del artĒculo: wbb0014204857

Descripci¾n Wellcome Collection, 2016. Hardcover. Condici¾n: Very Good. Very good, unused, however there is shelf wear on cover, including light marking, and some creasing Shipped from the UK within 2 business days of order being placed. N║ de ref. del artĒculo: mon0000172302