Artículos relacionados a A dowry of owls [Paperback] by Lawrence McKeever

A dowry of owls [Paperback] by Lawrence McKeever

A dowry of owls [Paperback] by Lawrence McKeever 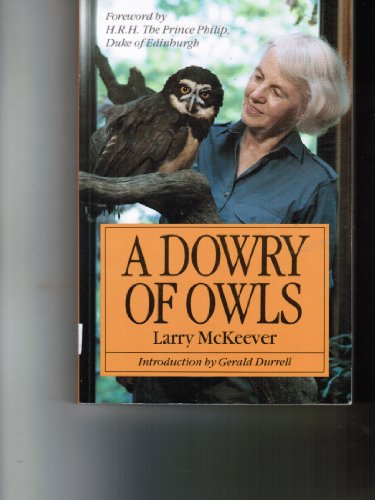 1. A DOWRY OF OWLS : Fowreword By H.R.H.The Prince Philip, Duke of Edinburgh

Descripción Lester & Orpen Dennys, Toronto, Canada, 1986. Soft Cover. Condición: Very Good. Stated First Edition. Text/NEW & Bright. Author signed to title page. Softcover/VG; strong & sound w/trace edge & shelf wear, and soil spot & book shop label to lower back. Light brown spotting (acidic paper reaction) to fEP & rEP, and text edges. PO label to front cover verso. Introduction by Gerald Durrell, and Forward by H.R.H. Prince Philip Duke of Edinburgh. A memoir and narrative of minding owls in distress by Lawrence McKeever, who with his wife Kay, founded the The Owl Foundation, a Canadian charitable organization dedicated to rehabilitation of injured or ophaned wild Canadian owls This is the story of how the McKeevers began their owl rehabilitation centre. In the spring of 1986 bird-watchers, inear Long-Point, on Lake Erie, found a Great Horned Owl that had been killed by a car; pitiful "beeping" in nearby woods led them to an owlet about four weeks old - barely fledged, feeble, and desperately emaciated. This baby owl was brought Kay and Lawrence McKeever who first nutured it their house before placing it in the care their "Niska" owls, a pair of Great Horned who were proven wonderful foster parents. When the owlet was about 6 months old the McKeevers moved it to a release training cage so it could practise catching mice "on the hoof" before releasing it to the woods, where it belonged. What followed was the McKeevers would receive anywhere from six to fifteen baby Great Horned Owls every spring, and weere able to return almost all to the wild. A magical tale of humans living well beside other living beings. Author Signed. Nş de ref. del artículo: 018755