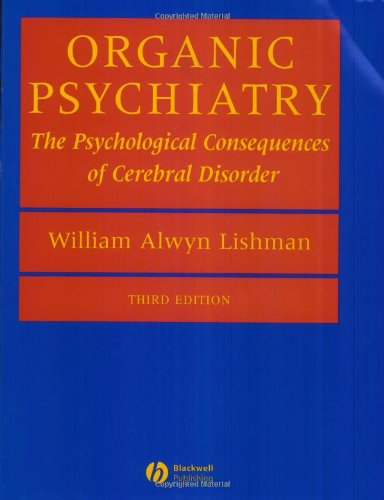 "This volume stands as a monument to Professor Lishman's industry in erudition. It is an invaluable reference work for psychiatrists and neurologists of all levels of experience. One can but agree with the verdict of Sir Denis Hill in his foreword of the firs edition:"There is no comparable book in the English-speaking world" No library and no clinician with any interest in organic psychiatry should be without it."; Psychiatric Developments on previous edition; "In this rigorously revised and updated new edition, the author's style remains both scholarly and readable, and the work is infused with clinical wisdom. It is one of the very few volumes that are indespensable for neurologists and psychiatrists."; The Lancet on previous edition; "If I had to choose ten books on neurology and psychiatry this would be one of them. If I had to choose just one book on neuropsychiatry this would be it."; Australian & New Zealand Journal of Medicine, on previous edition.; "Professor Lishman's book is a masterpiece. He has surveyed the entire domain of organic mental disorders from a perspective based on intimate knowledge of classic literature, extensive clinical experience, and the common-sense attitudes of British psychiatry. Any clinical neuropsychiatrist or researcher could profit from the wealth of knowledge summarized in this book."; Journal of Clinical Neurosciences.

This classic single-author text has been extensively revised and updated. As in previous editions it provides a comprehensive review of cognitive, emotional and behavioural consequences of cerebral disorder and their manifestations in clinical practice. In addition to standard neuropsychiatric conditions the subject matter encompasses endocrine, metabolic and toxic disorders with respect to their impact on brain function. Sizeable new sections have been added to take account of recent theoretical and clinical developments, particularly in the chapters dealing with the dementias and toxic disorders, and in relation to the expanding range of rarer neurodegenerative disorders. The problems of HIV infection receive extensive coverage, also the accumulating evidence pointing towards a neuropsychiatric basis for schizophrenia. Advances in brain imaging are dealt with in detail, also salient discoveries in the fields of molecular biology and molecular genetics. In the course of the revision almost as many new references have been added as remain from the previous editions.