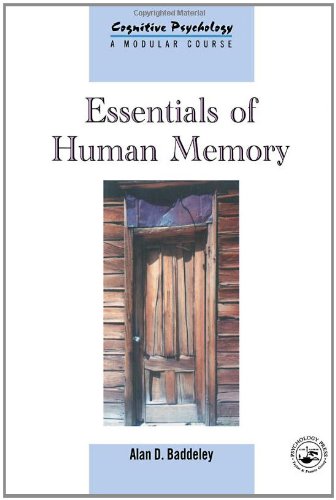 'The book is based on Baddeley's previous popular book, 'Your Memory: A User's Guide', and he has managed to retain the chatty, interactive style of that book whilst increasing the academic content considerably. The result is a book that will entrap the reader into trying out the numerous 'memory tests' whilst learning about memory research at the same time. The author has clearly put his vast knowledge about memory, learning, and retention to good use when constructing this book!' - Jenni A. Ogden, University of Auckland, in The Journal of the International Neuropsychological Society

'If forced to compile a list of the most influential memory psychologists of recent years, Alan Baddeley would certainly be a consensus pick ... it goes without saying that when Alan Baddeley writes a memory book, people will (and should) listen ... Students will love the style, particularly the stories and the practical examples ... All of the 'essentials' of memory are provided, and the student is likely to leave the course with a solid understanding of traditional memory theory.' - James S. Naime, Purdue University, in APA Review of Books

'Although a basic text for psychology undergraduates, this book is very accessible to a more general readership. It achieves this through an informal reading style, crammed with anecdotes and fascinating experiments, many of which the reader can perform on themselves to learn more about their own memory systems. I would recommend this book as a basic text and a good starting point for developing further knowledge.' - Catherine Jones, Kent, RCSLT Bulletin 2000

Essentials of Human Memory evolved from a belief that, although the amount we know about memory has increased enormously in recent years, it is still possible to explain it in a way that would be fully understood by the general reader. This book is based on an earlier book, Your Memory, which was intended for the general public, but began to be used as a basic memory text, thus encouraging the development of the present revised textbook version. Essentials of Human Memory combines coverage of the fundamental issues of human memory, based on laboratory research with abundant illustrations from studies in the real world and in the neuropsychological clinic, where dramatic memory deficits have continued to throw light on our understanding of normal memory.
After a broad overview of approaches to the study of memory, short-term and working memory are discussed, followed by learning, the role of organizing in remembering and factors influencing forgetting, including emotional variables and claims for the role of repression in what has become known as the false memory syndrome. The way in which knowledge of the world is stored is discussed next, followed by an account of the processes underlying retrieval, and their application to the practical issues of eyewitness testimony. The breakdown of memory in the amnesic syndrome is discussed next, followed by discussion of the way in which memory develops in children, and declines in the elderly. After a section concerned with mnemonic techniques and memory improvement, the book ends with an overview of recent developments in the field of human memory.