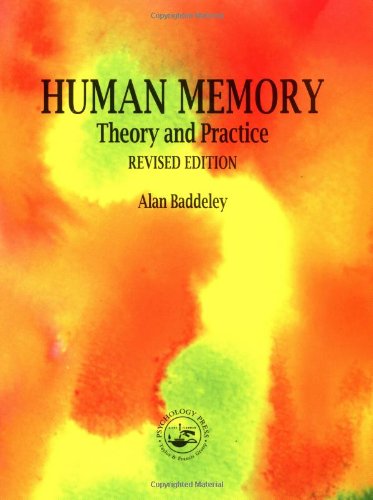 It is written in an unusually lucid and entertaining way, while nevertheless managing to grapple with important theoretical issues. This is an unusual skill (at least among academic psychologists!) Secondly, Baddeley appears to have fewer theoretical axes to grind than many writers of academic books. As a consequence, he succeeds in presenting balanced evaluations of the theories and experiments he discusses. - Michael W. Eysenck in The British Journal of Psychology

As well as having an impressive list of contents, the book is also extremely enjoyable to read. The author deals with complex issues in an approachable and understandable way and the style is chatty and free of confusing jargon. This is complemented by a liberal sprinkling of anecdotes which both inform and amuse. To summarise, this is an excellent book with no serious rivals in its field. It should be an essential item on the shopping list of all psychology undergraduates. - Tim Dalgleish in the Irish Journal of Psychology

Reformatted and including new chapters, this revised edition covers the topic of human memory and includes the role of consciousness in learning and memory, previously omitted from the first publication due to a lack of agreement about the new area of research. The three additional chapters cover: the philosophy and empirical factors influencing the study of consciousness; implicit knowledge and learning; and the evidence for implicit memory and its relationship to the phenomenal experience of 'remembering' and 'knowing'.