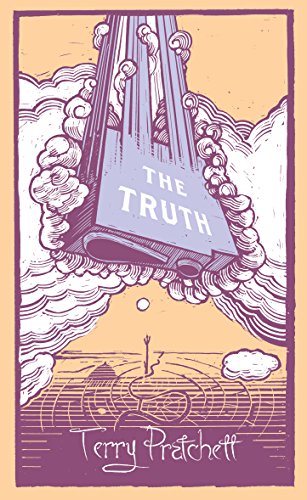 A beautiful hardback edition of the classic Discworld novelWilliam de Worde is the accidental editor of the Discworld's first newspaper. New printing technology means that words just won't obediently stay nailed down like usual. There's a very real threat of news getting out there., Now he must cope with the traditional perils of a journalist's life - people who want him dead, a recovering vampire with a suicidal fascination for flash photography, some more people who want him dead in a different way and, worst of all, the man who keeps begging him to publish pictures of his humorously shaped potatoes. William just wants to get at THE TRUTH. Unfortunately, everyone else wants to get at William., And it's only the third edition...

"Other writers are mining the rich seam of comic fantasy that Pratchett first unearthed, but what keeps Pratchett on top is - quite literally - the way he tells them." - The Times "The Truth is an unmitigated delight and very, very funny...The pace is compelling but he never lets his tale descend into simple farce." - The Times "[Discworld] has the energy of The Hitchhiker's Guide to the Galaxy and the inventiveness of Alice in Wonderland...[Terry Pratchett] has an intelligent wit and a truly original grim and comic grasp of the nature of things." - A.S. Byatt, Sunday Times

Terry Pratchett was the acclaimed creator of the global bestselling Discworld series, the first of which, The Colour of Magic, was published in 1983. In all, he was the author of over fifty bestselling books. His novels have been widely adapted for stage and screen, and he was the winner of multiple prizes, including the Carnegie Medal, as well as being awarded a knighthood for services to literature. He died in March 2015.

Descripción 2016. Hardcover. Condición: New. Hardcover. A beautiful hardback edition of the classic Discworld novelWilliam de Worde is the accidental editor of the Discworld's first newspaper. New printing technology means that wor.Shipping may be from our Sydney, NSW warehouse or from our UK or US warehouse, depending on stock availability. 448 pages. 0.466. Nş de ref. del artículo: 9780857524171