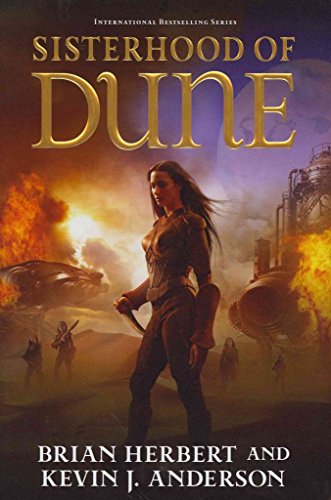 It is 83 years after the last of the thinking machines were destroyed in the Battle of Corrin, after Faykan Butler established himself as the first Emperor of a new imperium. War hero Vorian Atreides has turned his back on Salusa Secundus, flying off to parts unknown. Abulurd Harkonnen, convicted of cowardice, was sent away to live on gloomy Lankiveil, and his descendants continue to blame Vor for the downfall of their fortunes. Raquella Berto-Anirul has formed the Bene Gesserit School as the first Reverend Mother. Descendants of Aurelius Venport and Norma Cenva have built a powerful transportation company using mutated Navigators who fly "spacefolder ships". Gilbertus Albans has established a school on bucolic Lampadas teaching humans to become Mentats. Even so, decades after the defeat of the thinking machines, anti-technology fervor continues to sweep across the human-settled planets, with powerful fanatical groups imposing violent purges...

Kevin J. Anderson has over 20 million books in print in 30 languages worldwide. He is the author of, among others, the X-FILES novels, GROUND ZERO and the JEDI ACADEMY trilogy of STAR WARS novels - the three bestselling SF novels of 1994. He has also co-written the international bestselling prequels to Frank Herbert's monumental DUNE series. He has won, or been nominated for, many awards including the Nebula Award and the Bram Stoker Award. Visit his website www.wordfire.com The son of Frank Herbert (1920-86), Brian Herbert is a bestselling SF author in his own right. He has also written Dreamer of Dune, a comprehensive, Hugo Award-nominated biography of Frank Herbert.

Descripción Simon & Schuster, Limited, 2012. Condición: Good. UK ed. Ships from the UK. Former Library book. Shows some signs of wear, and may have some markings on the inside. Nş de ref. del artículo: GRP75357012

3. Sisterhood of Dune (Schools of Dune)

Descripción Simon & Schuster Ltd, 2012. Paperback. Condición: Very Good. The book has been read, but is in excellent condition. Pages are intact and not marred by notes or highlighting. The spine remains undamaged. Nş de ref. del artículo: GOR005259318

4. The Sisterhood of Dune (Dune Schools of Dune Trilogy 1)

Descripción Simon & Schuster Ltd, 2012. Hardcover. Condición: Good. Ex library copy with usual stamps/stickers Good condition is defined as: a copy that has been read but remains in clean condition. All of the pages are intact and the cover is intact and the spine may show signs of wear. The book may have minor markings which are not specifically mentioned. Most items will be dispatched the same or the next working day. Nş de ref. del artículo: wbb0015488709

Descripción Simon & Schuster Ltd, 2012. Hardcover. Condición: Good. Ex-Library Book. Has usual library markings and stamps inside. All orders are dispatched the following working day from our UK warehouse. Established in 2004, we have over 500,000 books in stock. No quibble refund if not completely satisfied. Nş de ref. del artículo: mon0003235200

8. The Sisterhood of Dune (Schools of Dune)