Artículos relacionados a Eradicating Ecocide: Laws and Governance to Stop the...

Higgins, Polly Eradicating Ecocide: Laws and Governance to Stop the Destruction of the Planet

Eradicating Ecocide: Laws and Governance to Stop the Destruction of the Planet 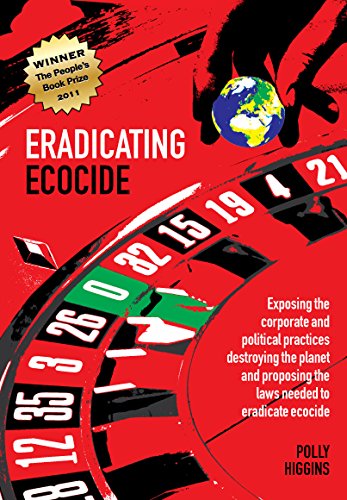 'Eradicating Ecocide... lays the framework for us to lobby our leaders for real environmental laws and contains tips on taking action... it outlines the steps you can take towards becoming an Erin Brockovich in your own right.' The Observer Magazine The beauty of this proposal is how it uses what is already there - the UN framework, the international criminal law as it has developed since World War II, and the trusteeship concept. Ecocide as a fifth crime against peace would be easily administered by the International Criminal Court without creating new structures or administrative bodies. A simple expedient, yet how revolutionary! A global standard of care would reconfigure the entire edifice of international justice on the foundation of Earth Jurisprudence, an Earth-centred approach to law and governance which acknowledges the biosphere as a whole as the source of rights. Eradicating Ecocide brims with hope and reads like a mystery novel. -- Ana Simeon Sierra Club BC 'Big shifts in international law can happen... [Higgins] makes a good moral and logical argument that the only way we are going to truly stop ecocide is to make it a serious crime.' -- Matt McDermott treehugger.com 'Eradicating Ecocide gives you all the answers you need, and it does so in a measured and well argued way... the book isn't another wild diatribe against business - rather it is an examination of international law and how environmental protection has somehow been left by the wayside... The clock to ensure the Earth remains healthy enough to support humankind is already ticking. This book asks everyone to re-examine the legal framework within which we are attempting to accomplish this, and provides business leaders with a golden opportunity of making it happen.' -- Chris Milton corporate-eye.com

'Eradicating Ecocide highlights the need for enforceable, legally binding mechanisms in national and international law to hold to account perpetrators of long term severe damage to the environment. At this critical juncture in history it is vital that we set global standards of accountability for corporations, in order to put an end to the culture of impunity and double standards that pervade the international legal system. Polly Higgins illustrates how this can be achieved in her invaluable new book.' Bianca Jagger, Founder and Chair of Bianca Jagger Human Rights Foundation Advocate for Crimes Against Present and Future Generations In Eradicating Ecocide, international environment lawyer and activist Polly Higgins sets out to demonstrate in no uncertain terms how our planet is fast being destroyed by the activities of corporations and governments, facilitated by 'compromise' laws that offer insufficient deterrence. She offers a solution that is radical but, as she explains with great competence and experience, absolutely necessary. The recent Mexican Gulf oil spill is a compelling reminder of the consequences of unchecked ecocide. Higgins advocates the introduction of a new international law against Ecocide. It would become the 5th Crime Against Peace and would hold to account heads of corporate bodies that are found guilty of perpetrating ecocide. The opportunity to implement this law represents a crossroads in the fate of humanity; we can accept this one change and in doing so save our ecosystem for future generations, or we can continue to destroy it, risking future brutal war over disappearing natural resources. This is the first book to explain that we all have a commanding voice and the power to call upon all our governments to change the existing rules of the game. Higgins presents examples of laws in other countries which have succeeded in curtailing the power of governments, corporations and banks and made a sudden and effective change, demonstrating that her proposal is not impossible. Eradicating Ecocide is a crash course on what laws work, what doesn't and what else is needed to prevent the imminent disaster of global collapse. Eradicating Ecocide provides a comprehensive overview of what needs to be done in order to prevent ecocide. It is a book providing a template of a body of laws for all governments to implement, which applies equally to smaller communities and anyone who is involved in decision-making.

2. Eradicating Ecocide: Exposing the Corporate and Political Practices Destroying the Planet and Proposing the Laws Needed to Eradicate Ecocide