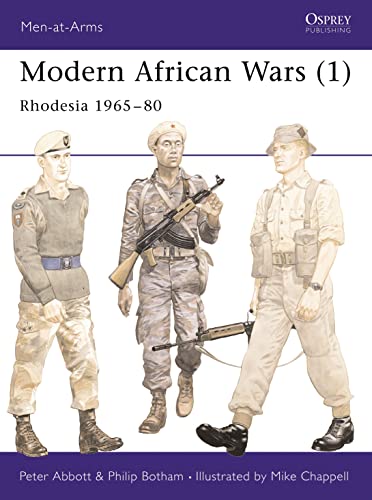 The Rhodesian War of 1965-80 is the battle for control of present day Zimbabwe. The former British colony of Southern Rhodesia rejected British moves towards majority rule and on 11 November 1965 the Rhodesian Prime Minister Ian Smith announced his country's Unilateral Declaration of Independence from Great Britain. That act sparked a series of violent encounters between the traditional colonial army and the African guerilla insurgents of the Patriotic Front. This book examines the successes and failures of the counter-insurgency campaign of Smith's security forces and the eventual bloody birth of a modern African nation.

Peter Abbott is a retired university lecturer. He has written or co-authored a number of Men-at-Arms titles for Osprey, including Men-at-Arms 131 Germany's Eastern Front Allies 1941-45 and MAA 202 Modern African Wars 2: Angola and Mozambique. He is particularly interested in 19th and 20th century armies that are less well known to the English speaking reader. Mike Chappell comes from an Aldershot family with British Army connections stretching back several generations. He enlisted as a teenage private in the Royal Hampshire Regiment in 1952 and retired in 1974, as RSM of the 1st Battalion The Wessex Regiment (Rifle Volunteers), after seeing service in Malaya, Cyprus, Swaziland, Libya, Germany, Ulster and home garrisons. He began painting military subjects in 1968 and since then has gained worldwide popularity as a military illustrator. Mike has also written and illustrated many books in the Osprey Military list.