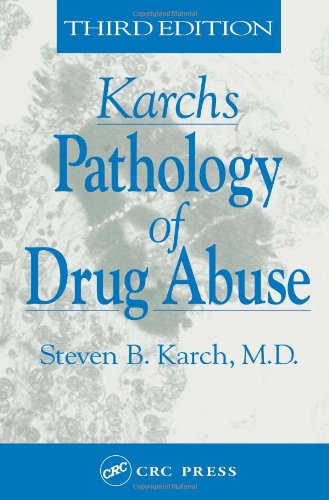 ABOUT THE THIRD EDITION: "All healthcare practitioners and organizations need this book. I love the organization and detail. Thorough does not do the detail justice. If every pathologist were as dedicated to a task as Dr. Karch has demonstrated in his preparation of the third edition, there would be fewer errors in the forensic aspects of the judicial system. I congratulate Dr. Karch for the best work ever written on drug abuse." - Charles L. Winek, Ph.D. Toxicology Editor, Forensic Science International" a mine of information about the pathology and toxicology of drugs of misuse. It is essential for any healthcare professional involved in the care, clinical management, or autopsy of drug misusers to have a clear understanding of how a particular drug affects the body, short-term and long-term, and what relevance the metabolism of the drug has to its clinical manifestation. This book provides all the answers. Dr. Karch is to be congratulated on producing the best and most readable book I have seen on the subjects included and I recommend it to anyone who works in any way with drug misusers or the investigation of drug related deaths or illness." - Jason Payne-James, Editor, Journal of Forensic Clinical Medicine "Karch's book is well illustrated and extensively referencedI warmly recommend it to anyone who deals in any capacity with the effects of substance misuse." - Chris Milroy, Medico-Legal Centre, Watery Street, Sheffield, UK ABOUT THE SECOND EDITION: "It is easy today for physicians to become technicians rather than professionals. A technician knows how to respond to a problem. The professional has the depth of knowledge that brings real understanding to a problem. This bookpresents a comprehensive view of each subject that it discusses. Dr. Karch's book is a book for professionals." -Journal of Forensic Science ABOUT THE THIRD EDITION "Dr. Karch has produced a truly comprehensive and useful reference work that belongs on the shelf of any professional interested in the sequelae of drug abuse." -Archives of Pathology and Laboratory Medicine

AUTHORITATIVE INFORMATION FROM THE SOURCE YOU TRUST

The third edition of Karch's Pathology of Drug Abuse continues to provide a comprehensive yet accessible guide to the pathology, toxicology, and pharmacology of commonly abused drugs. As in previous editions, the focus remains on the investigation of drug-related deaths and on practical approaches to the detection of drug abuse. It covers in detail the clinical consequences of drug usage and provides the latest information on clinical aspects of drug abuse. This well-written, extensively referenced resource supplies a mixture of clinical information and pathology findings.

3. THE PATHOLOGY OF DRUG ABUSE, THI

4. THE PATHOLOGY OF DRUG ABUSE, THI

5. THE PATHOLOGY OF DRUG ABUSE, THI