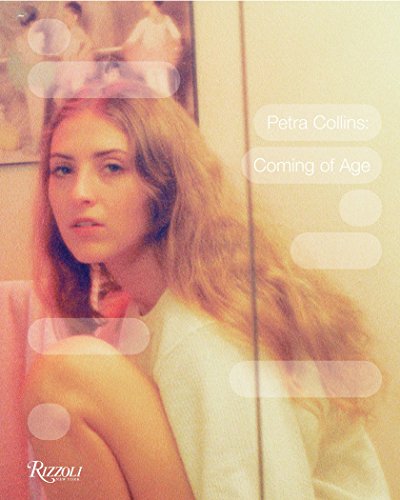 "In her new photo-driven memoir, Petra Collins: Coming of Age (Rizzoli), the 24-year-old Canadian artist, model, and social media sensation laments the fact that, when she was growing up, 'there weren't images of women positioned as anything but a sexual object.' " --W Magazine "Her success is not a fluke; the seriousness of her work goes beyond the pastel colors that have now taken over social media. She is a force to be reckoned with." --Refinery29 "I have a Rizzoli book that's coming out in November, which is really exciting. It's a retrospective of all my work. It's so crazy. I did a book called Babe, where I curated all my favorite female artists into one book. But this one will be my work. It's really wild." --Petra Collins, BillBoard.com "While known for her photography, it was her writing that she is most proud of. "My last essay I did in the book, I was really surprised that I wrote that -- like I didn't realize that I wrote that until someone quoted it back to me," she said. 'It was a nice self-discovery and a nice journey and I'm happy that I was able to write.' " --Women's Wear Daily "Petra Collins: Coming of Age is her first monograph embodying much of what her work has focused on thus far. An ode to girlhood, innocence, sexuality and liberation, Collin's photos are at times exciting, at others moody and typically vibrant in color." --Issue Magazine "Collins has released a book "Coming of Age" with Rizzoli Publications, which features photography from her earliest days, as well as essays that detail her time growing up." --Resource Magazine

Since bursting into the zeitgeist, the precocious Petra Collins has captured the hearts of the art and fashion worlds alike. Collins champions an inclusive mode of representation that inspires young women to celebrate how they live now and their agency in creating their image. When Collins shoots in series ranging from controversial self-portraits to emotionally charged and intensely coloured works she operates on the joys, excitement, tedium, and madness of growing up in today s interconnected kingdom of images. Revealing personal essays, Polaroids, and contributions by the women who inspire her unveil the unassuming grace at the centre of campaigns for Gucci and Adidas, films for the Tate, and countless editorials as photographer and subject. Collins embodies the best qualities of the emerging creative community she fosters in curatorial projects like The Ardorous: generous, collaborative, and open.