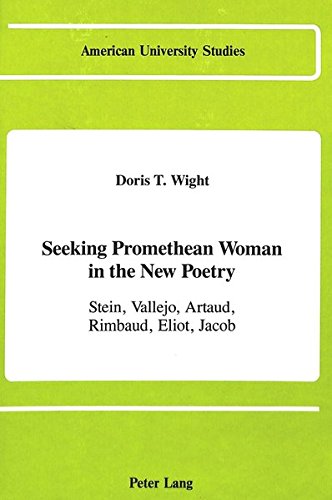 -Doris Wight's "Seeking Promethean Woman in the New" "Poetry" is an adventurous, thought-provoking study of some of the most hermetic poetry of the early 20th century, in particular Stein's "Tender Buttons, " Vallejo's "Trilce, " and Artaud's "L'Ombilic des Limbes." Her work will surely provide great insights into this imperfectly understood - and in many cases little known - poetry of the classic modern era. Wight's method is direct and clearly outlined: against a -promethean- woman envisaged by the "poetes maudits" of the 19th century she sizes up early modernist poetry and discovers therein images of woman that will cause some feminists to reconsider the modern (male) canon and others to rush to further amend the official version of the modernists' female.- (Keith Cohen, University of Wisconsin - Madison)"

Examining images of woman hidden in -hermetic- modern poetry, this work surmounts subterfuges of style to find problematic female archetypes that illumine today's sex-role problems. Wight's analysis of difficult material offers stimulation to literary critics and theorists, to poets, to teachers, to feminists, and to everyone interested in the mysterious processes of human thought and art."