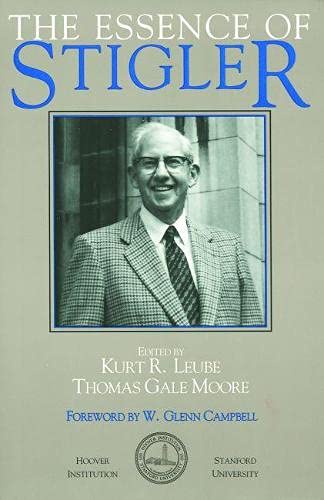 "Demonstrates the wide scope of Stigler's interest, his scholarly brilliance, and his contributions to the development of twentieth century economic thought and policies."

The twenty-four essays that appear in this volume exemplify the scholarly brilliance and intellectual curiosity that has marked the world of Nobel laureate George J. Stigler, who has been acknowledged as one of the foremost architects of twentieth-century economic thought.

Descripción Hoover Press, 1986. Condición: Good. A+ Customer service! Satisfaction Guaranteed! Book is in Used-Good condition. Pages and cover are clean and intact. Used items may not include supplementary materials such as CDs or access codes. May show signs of minor shelf wear and contain limited notes and highlighting. Nş de ref. del artículo: 0817984623-2-4

Descripción Hoover Press, 1986. Paperback. Condición: VERY GOOD. Pages are intact and are not marred by notes or highlighting, but may contain a neat previous owner name. The spine remains undamaged. Supplemental materials are not guaranteed with any used book purchases. Nş de ref. del artículo: 0817984623_abe_vg