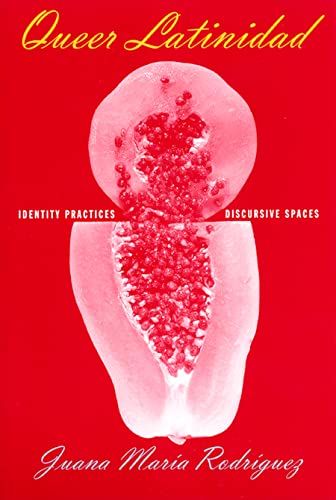 "It is rare to find as vital and sassy and smart an essayist as Juana Rodriguez. She takes you through the intersections of culture and theory in ways that compel us to rethink what queer does to Latinidad as much as what Latinidad does to queer. She shows what it means, politically and culturally, to read for the possibility of survival and affirmation. She is careful, attentive, dynamic, disorienting, and exhilarating as she reads political and cultural events, literary and theoretical texts, and the nuances of language use for a complex cultural subject in process. A fabulous read." -Judith Butler,Maxine Elliot Professor at the University of California at Berkeley "Mapping slippery subjects outside of fixed identities, this book is always against closure: Queer Latinidad at its best." -Jose Quiroga,author of Tropics of Desire: Interventions from Queer Latino America "Rodriguez furthers her work ... with an engaging writing style that is poetic, personal, philosophical and theoretical... This book is highly recommended." -Reforma Newsletter "A fascinating critical approach to the development of the so-called latinidad, i.e., the identity of Latinos in the US. Unlike that in other ethno-queer studies, Rodriguez's data and primary texts of analysis are not literary works. Instead, this refreshing, funny, and daring book takes the reader through unexplored queer Latino communities... Highly recommended." -Choice

The author documents the ways in which identity formation and representation within the gay Latinidad population impacts gender and cultural studies today.

Descripción New York University Press, United States, 2003. Paperback. Condición: New. Language: English. Brand new Book. According to the 2000 census, Latinos/as have become the largest ethnic minority group in the United States. Images of Latinos and Latinas in mainstream news and in popular culture suggest a Latin Explosion at center stage, yet the topic of queer identity in relation to Latino/a America remains under examined. Juana Maria Rodriguez attempts to rectify this dearth of scholarship in Queer Latinidad: Identity Practices, Discursive Spaces, by documenting the ways in which identities are transformed by encounters with language, the law, culture, and public policy. She identifies three key areas as the project's case studies: activism, primarily HIV prevention; immigration law; and cyberspace. In each, Rodriguez theorizes the ways queer Latino/a identities are enabled or constrained, melding several theoretical and methodological approaches to argue that these sites are complex and dynamic social fields.As she moves the reader from one disciplinary location to the other, Rodriguez reveals the seams of her own academic engagement with queer latinidad. This deftly crafted work represents a dynamic and innovative approach to the study of identity formation and representation, making a vital contribution to a new reformulation of gender and sexuality studies. Nş de ref. del artículo: AAV9780814775509