Artículos relacionados a I May Be Wrong But I Doubt It

Barkley, Charles I May Be Wrong But I Doubt It

I May Be Wrong But I Doubt It 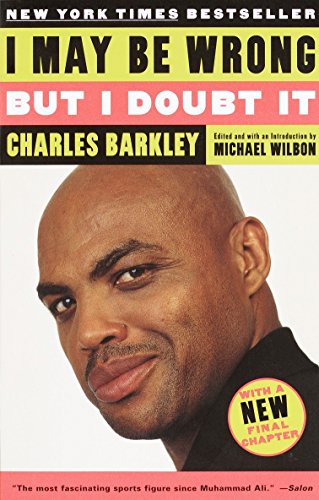 "Charles Barkley always makes me laugh, and he always makes me think. He hasn't held anything back in his book -- if anything, this is the most personal I've ever seen him. The only whopper is the title: when has Barkley ever admitted to being wrong?"
-- Tiger Woods

"Whether you think he's wrong or right, you'll never find Charles Barkley dull, evasive or afraid. He's blunt, honest and funny as hell, a man with strong convictions and a determination to express them without fear of offending the sensibilities of more timid souls. He's got guts, and there's as much to admire in this book as there is in the man. In I May Be Wrong, But I Doubt It, Barkley refers to one of my campaigns as a rough experience. It might have been, but at least I never had to post up against Sir Charles. Now that would have been really hard."
-- Senator John McCain "I find Charles to be great company on the golf course. Of course, he has never been shy about his opinions, and he has not changed for this book! Charles addresses issues that are important to all of us, not just people close to the game of basketball. Frank, funny and provocative, this is a book that will stir people to think."
-- Dean Smith
Reseńa del editor:

8. I May be Wrong but I Doubt it (Paperback)

Descripción Random House Trade, Australia, 2003. Paperback. Condición: New. Reprint. Language: English. Brand new Book. Charles Barkley has never been shy about expressing his opinions. Michael Jordan once said that we all want to say the things that Barkley says, but we don't dare. But even die-hard followers of the all-time NBA great, the star of TNT's Inside the NBA and CNN's TalkBack Live, will be astonished by just how candid and provocative he is in this book--and just how big his ambitions are. Though he addresses weighty issues with a light touch and prefers to stir people to think by making them laugh, there's nothing Charles Barkley shies away from here--not race, not class, not big money, not scandal, not politics, not personalities, nothing. "Early on," says Washington Post columnist and ESPN talk show host Michael Wilbon in his Introduction, "Barkley made his peace with mixing it up, and decided the consequences were very much worth it to him. And that makes him as radically different in these modern celebrity times as a 6-foot-4-inch power forward." If there's one thing Charles Barkley knows, it's the crying need for honest, open discussion in this country--the more uncomfortable the subject, the more necessary the dialogue. And if the discussion leader can be as wise, irreverent, (occasionally) profane and (consistently) funny as Charles Barkley, so much the better. Many people are going to be shocked and scandalized by I May Be Wrong but I Doubt It, but many more will stand up and cheer. Like Molly Ivins or Bill O'Reilly, Charles Barkley is utterly his own thinker, and everything he says comes from deep reflection. One way or another, if more blood hasn't reached your brain by the time you've finished this book, maybe you've been embalmed. Nş de ref. del artículo: BZV9780812966282