Artículos relacionados a The Shadow Rising: 4/12 (Wheel of Time (Paperback)) 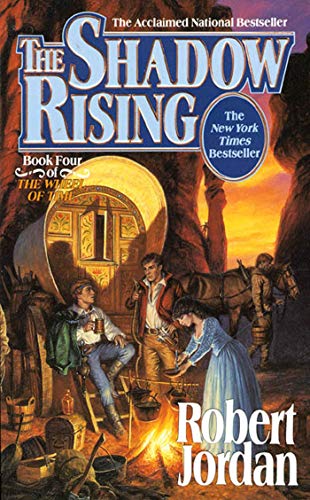 "Robert Jordan has come to dominate the world Tolkien began to reveal." - The New York Times

"The fourth volume of the most ambitious American fantasy saga continues to suggest that The Wheel of Time will also be the finest... This volume, indeed the whole saga, surpasses all but a few of its peers and is highly recommended for all collections." - ALA Booklist

"Jordan's multivolume epic continues to live up to its high ambitions... a feast for fantasy aficionados. Expect demand for this." - Library Journal

"A work of genuine and often stirring imagination." - Kirkus Review

"This fully imagined saga threatens to burs the seams of its steadily more intricate design... The sheer force of [Jordan's] invention develops a momentum that [is] hard to resist." - Publishers Weekly

"This series is so complex, I can't recommend starting anywhere but at the beginning [The Eye of the World], but the volumes only get richer as they go along." - Locus

The seals of Shayol Ghul are weak now, and the Dark One reaches out. The Shadow is rising to cover humankind.In Tar Valon, Min sees portents of hideous doom. Will the White Tower itself be broken?In the Two Rivers, the Whitecloaks ride in pursuit of a man with golden eyes, and in pursuit of the Dragon Reborn.In Cantorin, among the Sea Folk, High Lady Suroth plans the return of the Seanchan armies to the mainland.In the Stone of Tear, the Lord Dragon considers his next move. It will be something no one expects, not the Black Ajah, not Tairen nobles, not Aes Sedai, not Egwene or Elayne or Nynaeve.Against the Shadow rising stands the Dragon Reborn.....